The Circular Firing Squad Is At It Again

When will they ever learn? 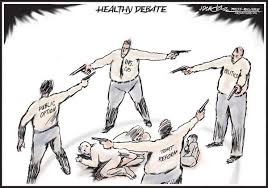 Today should have been a great day for the Dems. Seriously.  The House of Representatives reconvened to help states insure that teachers, firefighters and police will stay on the job, and to make sure funds were available for Medicaid.  Of course, the naysayers on the other side of the aisle have no sense of decency and don’t seem to give a shit whether or not their constituents are taken care of… but that whole story has taken a back seat to two other sideshow stories today.

First, Charlie Rangel, he of the 13 ethics violation charges, decided to take TODAY of all days to exercise his right to get up on the House floor to try to defend his reputation.  On a day that the Dems should be proudly crowing about doing something good for the people of the country.  Instead, Charlie Rangel’s ethics, or lack thereof, would take the spotlight.

Well, the White House could have used that incident to point fingers and blame someone else for their troubles… until White House press secretary Robert Gibbs opened his big fat mouth!

He gave an interview to The Hill, blasting the “professional left,” by whom I guess he meant the few liberal voices on cable television and, perhaps, radio:

“I hear these people saying he’s like George Bush. Those people ought to be drug tested,” Gibbs said. “I mean, it’s crazy.”

The press secretary dismissed the “professional left” in terms very similar to those used by their opponents on the ideological right, saying, “They will be satisfied when we have Canadian healthcare and we’ve eliminated the Pentagon. That’s not reality.

Of those who complain that Obama caved to centrists on issues such as healthcare reform, Gibbs said: “They wouldn’t be satisfied if Dennis Kucinich was president.”

Seriously Gibbs, you want to go there?  I think I might be satisfied if Dennis Kucinich was president. He would have fought for single payer health care, and certainly wouldn’t be sending thousands more troops to Afghanistan and asking for billions of dollars more to fund these reprehensible wars, especially while our country and its citizens are drowning in debt.

Even Congressman Keith Ellison (D-MN) took such umbrage at Gibbs’ remarks that he told Huffington Post the Press Secretary should resign!

Ellison said that Gibbs’s resignation would be an appropriate response. “I think that’d be fair, yeah. That’d be fair, because this isn’t the first time. And, again, people of all political shades worked very hard to help the president become the president. Why would he want to go out and deliberately insult the president’s base? And why would he confuse legitimate critique with some sort of lack of loyalty. Isn’t this what the far right does? Punishes people who are not ideologically aligned with President Bush?”

It’s wrong to suggest that progressives want to eliminate the Pentagon, said Ellison, adding that he doesn’t know a single Democrat who has espoused that view. “I know of none. So I think that was an inflammatory remark that is emblematic of his careless use of language and is an example of why he may not be the best person for the job,” he said. “Gibbs crossed the line. His dismissal would be fair.”

Ryan Grim, who wrote that piece for Huffington Post, will join me at the top of tonight’s show to talk about Robert Gibbs’ verbal diarrhea, along with the two other stories that I mentioned at the top of this post: the passage of the bill for which Congress reconvened today, and the untimely speech delivered by Charlie Rangel.

Don’t worry, my show is over at 8pm ET, just in time to hear Keith Olbermann deliver his Special Comment in response to Mr. Gibbs.  I can’t wait for that one.

Just in case you missed it, here’s Charlie, in all of his, um, glory…

We’ll also delve into FireDogLake’s Just Say Now campaign (with Students for Sensible Drug Policy) to legalize marijuana with Jon Walker, and get a news update from Talk Radio News.

In hour two, Nicole Belle of Crooks & Liars joins in for our weekly “Fools on the Hill” segment in which we dish about the ridiculous things said on the Sunday talking head shows.