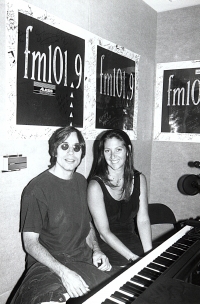 For most of my adult life, I worked in music radio.

The high point of my career was in the 90’s and early 2000’s. After spending 1990-1994 at KLOS in Los Angeles as the producer of the Mark & Brian Show, I heard rumors that a new Triple A (Adult Album Alternative) station was coming to LA. Gene Autry’s Golden West Broadcasters’ one remaining station – then an easy-listening station with the unfortunate call letters of KLIT – was going to change formats. I learned that Dennis Constantine, a pioneer of this format, was consulting. So I reached out to him.

Dennis was based in Boulder Colorado, the home of KBCO, one of the few heritage Triple A stations that remains on the air today. To make a long story short, I flew out to meet with him and, when KSCA fm 101.9 debuted as Southern California’s Album Alternative on the July 4 weekend of 1994, I was the midday host. Eventually I moved to mornings, and then took over as Music Director as well.

(A side note: A listener had archived the ksca.com website when the station went dark. Although it remained online for over 20 years, that site went dark in 2019. Thankfully, the internet archive’s Wayback Machine took a partial snapshot of the site on Dec 22, 1996.  Just click on Einsten to enter! Most of the links don’t work, but some do… including the list of LA’s Finest Rock A to Z, to give you an idea of the amazing playlist of this radio station!)
**Update… For some reason, I checked that listeners archived site again, and IT’S BACK! This is the link to the KSCA homepage as it appeared the day we went off the air Feb 4, 1997. Many of the links work, so enjoy exploring!

One of my responsibilities from the start was to book what became known as The Music Hall. In reality, it was an enclosed hallway between the main studio and the production room, but the acoustics were perfect. We hosted dozens of artists in there for the three years the station was on the air.

Unfortunately, KSCA – which later  became known as LA’s Finest Rock — was a casualty of the Telecommunications Act of 1996 which did away with ownership limits and began the era of radio consolidation, and the beginning of the end of my industry. In February of 1997, KSCA was sold and flipped to a Spanish music format.

A few years later, Clear Channel resurrected Triple A radio in Los Angeles with Channel 103.1 – two stations, one in Santa Monica and the other in Newport Beach, both at 103.1 on the FM dial simulcast our World Class Rock station. A couple of years later, that station – also the victim of consolidation- was also sold and flipped to a Spanish language format.

In this space, I’ll share some of those sessions.

We’ll start with my first. David Byrne was not only my first interview, but he was the first artist to appear live in the KSCA Music Hall!