Who Agreed Zimmerman Said “Punks” and not “Coons”? 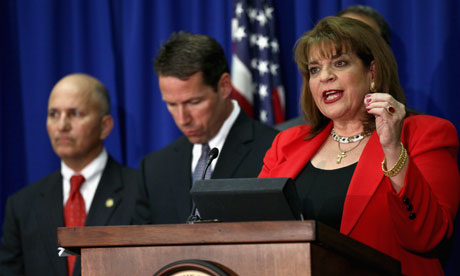 Ever since I heard prosecutor John Guy misquote George Zimmerman in his shocking expletive-laced opening statement to the jury, I’ve been wondering why they would stipulate that the killer didn’t use the racial epithet that so clearly assaults my ears each time I hit ‘play’.

But the first words out his mouth after saying “Good morning” to the jury, was “fucking punks”.

That is NOT what George Zimmerman said on that 911 call. I don’t care how many “experts” say otherwise, but I’ve listened over and over, and hear quite clearly Zimmerman’s hatred and racism seethe in his under-his-breath declaration “fucking coons”.

Listen again to the entire call:

And listen again to the excerpted obscene utterance:

Even listen to CNN’s expertly “cleaned up” audio.  No difference to my ears.

Put on headphones and let Zimmerman’s words assault your ears.  There’s no way to hear it any differently.  Obviously the prosecution argued to let that in, right?

But it wasn’t the smooth John Guy or the not-as-easy-on-the-eyes Bernie de la Rionda who was guilty in this massive instance of prosecutorial misconduct, but instead Special Prosecutor Angela Corey whose fatal error allowed the judge to rule in a pretrial motion that race was not to be mentioned as a motive.

If the prosecution had asked for a hearing on exactly what Zimmerman said in that call – “fucking coons” (at the 2:21 mark in the first clip above)  along with his earlier admonition “these assholes, they always get away” (at 1:37 in that same clip), perhaps this would have been an entirely different case – and not one in which the prosecution, in its closing statement, declared that this was not a case about race.

But they didn’t have that option because State Attorney Angela B. Corey, in her Affidavit of Probable Cause charging Zimmerman with Second Degree Murder stated:

Although I never thought I’d ever be using Nancy Grace to help make a point, apparently she’s in agreement with me on this.

In case you were wondering about Angela Corey and why she would do something so egregious as to torpedo her own case, I direct you to a Daily Beast article about the woman (previously best known for prosecuting a 12-year old for first degree murder), who was appointed Special Prosecutor in this case by Florida Governor Rick Scott.

In a press conference after George Zimmerman was acquitted of second-degree murder in the death of Trayvon Martin, prosecutor Angela Corey said the case has “never been about race or the right to bear arms.”

My response to that: Bring on the federal civil rights case.  Corey should be fired immediately.

On today’s show, we took a look at the other trial that’s been going on for the past few months – the Bradley Manning court martial.  Clark Stoeckley (@WikiLeaksTruck) is an artist who’s been at every day of the trial, including all the of the pre-trial hearings, sketching and writing about what he’s seen and heard.

And since it’s Monday, Nicole Belle of Crooks and Liars joined in for our weekly Fools on the Hill segment.  Of course, most of the discussion on the Sunday shows centered around the Zimmerman not guilty verdict.

Privilege.  Privilege can be a wonderful thing.  But privilege can also blind you to those who don’t share it with you.  The Beltway Villagers are up to their carefully coiffed hairlines in privilege and it hasmost certainly blinded to them to others. Others like Trayvon Martin.

So Tucker Carlson, whose continuing career is just inexplicable to me, likens Jessie Jackson and Al Sharpton as “hustlers and pimps” instead of civil rights leaders.

And Karl Rove thinks that it’s President Obama who has ripped this country apart…by sympathizing with Trayvon’s parents.  If that isn’t proof that Rove is a sociopath, I don’t know what is.

On Meet the Press, Kerry Sanders tells us that the rallies and protests surrounding the Zimmerman verdict is just black people who didn’t get the verdict they wanted.  So a white man comforts his primarily white audience that the black people are just angry because they were expecting something they didn’t deserve.

And Rick Perry insists that the Zimmerman verdict proves that the ‘justice system is color blind’.  Of course it’s entirely possible he’s saying that because he doesn’t perceive Zimmerman as a white man.

Staying with Rick Perry, he quickly defects Candy Crowley’s questioning on the draconian new abortion bill that they could not get passed in a regular legislative session, turning women’s health care needs into a states’ rights issue.