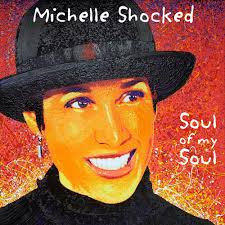 The mystery surrounding Michelle Shocked’s shocking comments from the concert stage at Yoshi’s in San Francisco Sunday night continues as conflicting accounts of what actually happened surfaced, but no clear statement from the singer-songwriter herself.  Those comments will come tomorrow morning here, live on my show.

Music journalist Chris Willman at Yahoo music followed up on his original story with one that includes an alternate take on what happened.   The follow-up, “Michelle Shocked: ‘Hatemonger’ or Misunderstood Provocateur”  sounds more like what my personal knowledge of Shocked (through her music and my interviews with her over the years) leads me to believe.

In the piece, Willman quotes Colin Epstein, a fan who had volunteered via Twitter in advance of her show to accompany her on harmonica for the song “Graffiti Limbo”.

@mshocked Need a harp player for Graffiti Limbo at Yoshi’s?I’m no Rod Piazza, but I’m game.

As is her tendency, she took him up on it!

As  Willman related in that Yahoo article:

Here is Epstein’s take, excerpted: “It’s hard to describe what went down at Yoshi’s because it was so odd and disjointed. I think some of the statements in

[Yahoo’s previous] story about Ms. Shocked having emotional issues last night may not be far off.” At the beginning of the night, “Shocked’s fear, whether bad stage fright or something else, seemed quite genuine. The initial attempt to kickstart the show via Twitter didn’t come off, and the choice we were offered, ‘truth or reality,’ was extremely puzzling. I was definitely worried about how the evening was going to go.” But once the music began in earnest, he, like everyone else queried, thought her first set turned out to be terrific.

It’s when things began to go horribly right after intermission that he saw something different than much of the rest of the crowd did. Shocked’s faith is “something that clearly means a lot to her, and she was trying to introduce her Christianity into the show. I’ve seen her do this before with no problem. But… she seemed disjointed, and unsure of where things were going. One thing I haven’t seen reported is when Shocked said that she was tired of ‘Christians that hide their hypocrisy behind a cross.’ It was that statement that led me to believe the some of her others were ironic. But while I’ve read plenty today on her attitude towards gays, this criticism of certain Christians seems to have slipped by. She said some things that didn’t seem connected, and even didn’t make sense, including something like ‘when Prop 8. passes and priests are forced at gunpoint to marry gays.’ Since Prop. 8 bans gay marriage, that thought hardly holds together.” But, Epstein says, “I took this statement as ironically mocking the extremist stances some liberals expect from Christians. Obviously, though, that went over like a sack of bricks, and the tone got ugly.” Before long, “she said something about ‘now y’all can tweet that Michelle Shocked said God hates f–s,’ but I heard that as resignation to how things were being misread, as opposed to an actual boast or opinion, as it’s been reported elsewhere. At some point Shocked broke into a long speech in Spanish, which I don’t speak. So for all I know, that could have been full of vitriol worthy of the Westboro Baptist nutcases.

“By now, in Epstein’s view, reconciliation between audience and performer was impossible. “As she tried to move past this hole she’d dug for herself and start into a song, certain members of the crowd wouldn’t let her. They were obnoxiously heckling her, and shouting out all sorts of stuff about homophobia and what a terrible person she was. I thought their mood and tone was far uglier and more judgmental than anything I’d heard from the stage.” His companion and he “were both looking around, watching people leave in a huff while flipping Shocked the bird… When my friend politely asked a woman heckler to either stop it or quietly leave, the woman tried to pick a physical fight with my friend and insulted her. It really didn’t seem like the voices of compassion and tolerance were at work there. Just knee-jerk self-righteousness giving way to a mob mentality. We were both upset with Yoshi’s management when they cut the lights and sound on Shocked in mid-song.

“Epstein’s conclusion? “I understand that gay rights are a huge deal in San Francisco, and as far as I’m concerned they should be a huge deal everywhere. But off-kilter, somewhat random comments of an apparently troubled woman don’t make a rant. There wasn’t near enough focus, momentum, or cohesion for Shocked’s statements to qualify as a rant. Should Shocked have perhaps slowed things down and explained herself more clearly? Yes, she damn well should have. But I’m not sure she could at that point, between her agitation and the crowd’s ugly mood, which seemed largely driven by an initial few, but very vocal, over-reactions. I can’t pretend to understand everything that happened that night. But I was willing to cut a woman some slack who had talked of nothing but compassion and helping the less fortunate since I first saw her play 25 years ago.”

Mr. Epstein emailed me yesterday as well, and I got the feeling that Michelle was attempting to make a point which got drowned out by the mob mentality that was so pissed off they tuned out any possible explanation.

Whether that’s the case or not, we’ll find out tomorrow.  But the Michelle Shocked I know never does things the easy way, as explained, perhaps, in her song “The Hard Way”:

Oh, the troubles I’ve known!
I seem to learn everything the hard way
I’m not old enough to be on my own
But I’m much too old to stay

I always believed I ran away
But now I know I was told to go
Maybe it’s worked out better this way
What could you say I didn’t already know?

Again, we’ll find out tomorrow morning….  Just one last point.  Other than our public exchange in which we set the time for this interview, I have not spoken with or otherwise heard from Michelle, so you know as much as I do.

Today on the show, Julianna Forlano joined in.  She’s a regular with me on Thursday mornings, but since I moved her to make way for Bob Ney and Michelle Shocked tomorrow, she came  on the show today to talk about the 10th anniversary of the Iraq war, the spinelessness of the Democrats for caving on bringing an assault weapons ban to the Senate floor, and more.

of She’s History joined in to talk about the sad  rape stories that have dominated the news of late, and Crooks and Liars’ helped round out the show.

*** Nicole’s note*** Three strange things happened as I tried to publish this post.

1.  My site went down. It wasn’t down for long, but long enough that I couldn’t post before having to leave to pick my kid up from school.

2.  An audio recording of the “rant” was posted to the San Francisco Bay Guardian.  You can listen to that here.

I’m still digesting it, but will have lots of questions for Michelle tomorrow regarding it.

3. I’m now seeing that Buzzfeed is reporting “Late last night, Shocked finally responded to the reports in and “open letter” distributed by her publicist.”  This is interesting, because the person listed on her website, Cary Baker, reports that he hasn’t worked with her in four years and he’s none too happy that his name is still on her website — especially as he just returned from SXSW to this firestorm when he has work for his real clients to deal with.  (Cary is an old friend, and he told me this first-hand.)  The Buzzfeed report states that Michelle released this statement through her publicist last night, with no clue as to who the publicist is — and Michelle, herself, who has been tweeting, albeit somewhat cryptically, has not mentioned it.

With that in mind, here’s the “open letter” Buzzfeed is attributing to Shocked:

I do not, nor have I ever, said or believed that God hates homosexuals (or anyone else). I said that some of His followers believe that. I believe intolerance comes from fear, and these folks are genuinely scared. When I said “Twitter that Michelle Shocked says “God hates faggots,” I was predicting the absurd way my description of, my apology for, the intolerant would no doubt be misinterpreted. The show was all music, and the audience tweets said they enjoyed it. The commentary came about ten minutes later, in the encore.

And to those fans who are disappointed by what they’ve heard or think I said, I’m very sorry: I don’t always express myself as clearly as I should. But don’t believe everything you read on facebook or twitter. My view of homosexualty has changed not one iota. I judge not. And my statement equating repeal of Prop 8 with the coming of the End Times was neither literal nor ironic: it was a description of how some folks – not me – feel about gay marriage.

The show, and the rant, was spontaneous. As for those applauding my so-called stance that “God Hates Faggots,” I say they should be met with mercy, not hate. And I hope that what remains of my audience will meet that intolerance with understanding, even of those who might hate them.

Folks wonder about my sexuality, but denying being gay is like saying I never beat my husband. My sexuality is not at issue. What is being questioned is my support for the LGBT community, and that has never wavered. Music and activism have always been part of my work and my journey, which I hope and intend to continue. I’d like to say this was a publicity stunt, but I’m really not that clever, and I’m definitely not that cynical.

But I am damn sorry. If I could repeat the evening, I would make a clearer distinction between a set of beliefs I abhor, and my human sympathy for the folks who hold them. I say this not because I want to look better. I have no wish to hide my faults, and – clearly – I couldn’t if I tried.

That statement was followed by a second:

I believe in a God who loves everyone, and my faith tells me to do my best to also love everyone. Everyone: gay or straight, stridently gay, self-righteously faithful; left or right, far left, far right; good, bad, or indifferent. That’s the law: everyone.

I may disagree with someone’s most fervently held belief, but I will not hate them. And in this controversy, that means speaking for Christians with opinions I in no way share about homosexuality. Will I endorse them? Never. Will I disavow them? Never.

I stand accused of forsaking the LGBT community for a Christianity which is – hear me now – anathema to my understanding of faith. I will no doubt take future flack for saying so. I’m accused of believing that “God hates fags” and that the repeal of Prop 8 will usher in the End Times. Well, if I caused such an absurdity, I am damn sorry. To be clear: I am not now, nor have I ever been, a member of any so-called faith preaching intolerance of anyone. Again, anyone: straight or gay, believers or not: that’s the law.

That means upholding my punk rock values in the most evangelical enclaves and, in this case, speaking up for the most fearful of fundamentalists in, well, a San Francisco music hall full of Michelle Shocked fans.

As an artist in this time of unbearable culture wars, I understand: this means trouble, and this is neither the first nor last time trouble has come my way. And that’s fine by me.