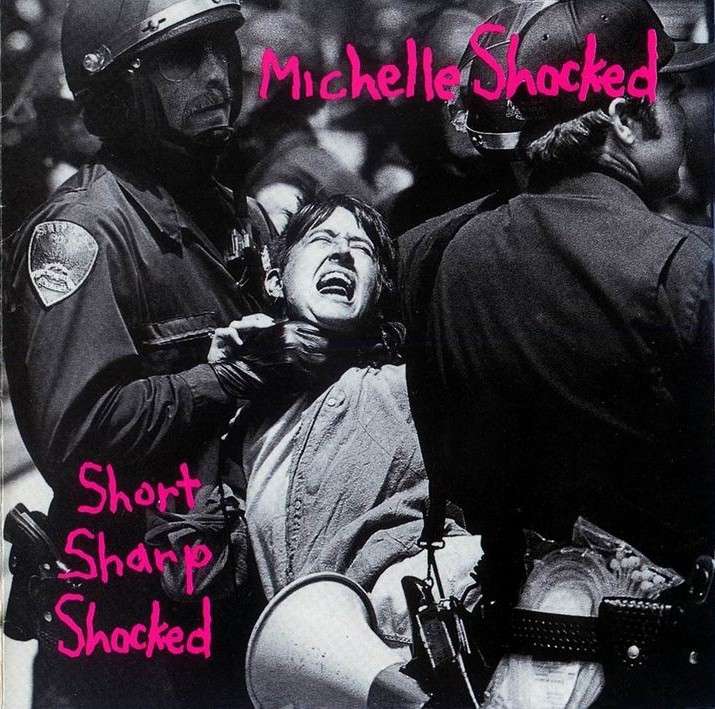 I’ve known Michelle Shocked for about 25 years.  I first met her in 1988 when her label at the time put a bunch of radio people on a train from Los Angeles to San Diego and back for a performance to promote her first single, “If Love Was a Train” .    It was probably four or five years later that I first interviewed her.

I had the pleasure of hosting Michelle Shocked on the air a number of times throughout my radio career.  One particularly wonderful,  memorable appearance was from August of 1994 at the now defunct but legendary KSCA (fm 101.9) in Los Angeles.  She came in with a couple of the members of Hothouse Flowers and put on a great performance. The last song they played, “Come a Long Way”, became an anthem of sorts for the station, and was the last song we played before the station flipped to a Spanish language format.

The last time I spoke with Michelle was a couple of years ago, when I got a press release about Occupy the Rose Parade.  It seemed that Michelle would be leading a marching band in this alternate parade.  I invited her to join me as I was guest hosting the Randi Rhodes program and we again had a wonderful conversation.

That’s why the news that Michelle went on a virulent anti-gay rant during her show Sunday night at San Francisco’s Yoshi’s was so disconcerting.  This was not the Michelle Shocked I knew.

Knowing that there must be more to the story, I tried to contact Michelle.  I sent her an email, called her cellphone and, when I got voicemail, left a message.  I also texted her.  In the meantime, I had been exchanging tweets with others who were concerned/outraged/freaking (you get the idea) — and Michelle responded to one of those twitter exchanges:

@nicolesandler @angie_coiro @tomtomorrow Hey Nikki, after all you’ve done for me over the years, I owe you that interview. Friday, 3 PST?

After I responded with the fact that I don’t do a show on Friday’s and with my show times, she suggested Thursday morning:

So, Thursday morning it is…  If you have a question, comment or were there at Yoshi’s Sunday night and want to send along any info, please feel free to email me (nicole at nicolesandler.com).

Today on the show, Alternet’s Adele Stan joined in tell us about her CPAC experience(!) and, as she does every Tuesday morning, The Political Carnival‘s GottaLaff hung with me in hour two to talk about the rest of the news.

She brought us these stories:

“I trusted that gun for our safety. It ruined our life,” said mom of the quadriplegic shooting victim who took down cheap gun makers.

VIDEO: “Now step away from the teleprompter,” said Sarah Palin reading from a teleprompter at #CPAC2013

And I added one truly sickening story to the “Guns in the News” section:  Mike Lupica of the NY Daily News reporting on the Newtown shooter’s sick twisted reasons for killing all those children.