Prouty, the Pope, and more Poop 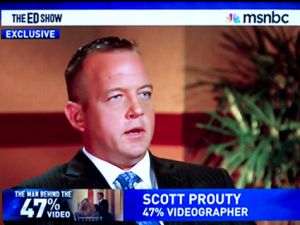 Meet Scott Prouty.  We’ve been waiting a long time to hear from this man!  Scott Prouty came forward last night on The Ed Show as the guy behind the infamous “47%” video.

Of course, David Corn and Mother Jones played a big role in getting the video out. Corn explained how it all unfolded.

For nearly a fortnight, he and I had been building a long-distance rapport via private tweets, emails, and phone conversations as we discussed how best to make public the secret video he had shot of Mitt Romney talking at a private, $50,000-per-plate fundraiser in Boca Raton, Florida. Now I was almost ready to break the story at Mother Jones. I had verified the video, confirming when and where it had been shot, and my colleagues and I had selected eight clips—including Romney’s now-infamous remarks about the 47 percent of Americans he characterized as “victims” unwilling to “take personal responsibility and care for their lives”—to embed in twoarticles. We had blurred these clips, at the source’s request, to make it difficult to tell where Romney had uttered these revealing comments, while clearly showing that it was Romney speaking. The goal was to afford the source a modicum of protection.

It’s a great story, from every angle — except, perhaps, from Romney’s.  But Scott Prouty should be very proud.  I think we’ll be hearing and seeing a lot more of him…

Meet Jorge Mario Bergoglio, now more commonly known as Pope Francis.  Actually, that’s the late great radio personality Neil Rogers on the left, the new pope is on the right.  But there’s a reason for that picture, other than the fact that they could be the same person.  My friend Jorge Rodriguez (note the same first name as the new pope) who worked with Neil Rogers for many, many years, is my colleague at SoFloRadio.com, and a lapsed Catholic who is even more outspoken about organized religion and the Catholic church than I am.   So, I invited Jorge to join me on the show this morning for a pointed conversation about the hypocrisy of and everything else that’s wrong with that instution.. Julianna Forlano, the funny woman behind Absurdity Today, made her debut appearance as our Thursday morning regular guest with whom I will shoot the shit each week.  Today, we talked about the Pope, Scott Pouty and, yes, poop… again courtesy of Carnival Cruise Lines (they’ve got another poop deck going at sea…)