GOP’s Zombie War on Women or Love the Fetus, Hate the Child 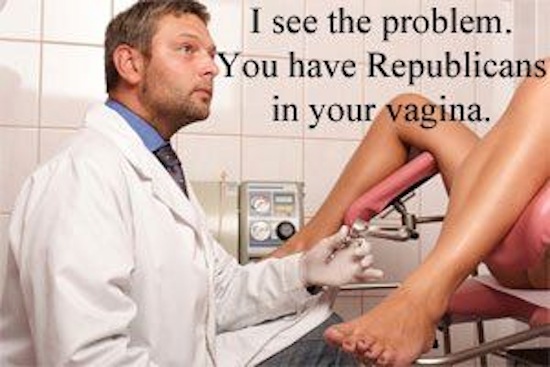 March 18, 2013 was less than four months ago. That was the day that RNC chair, (the unfortunately named) Reince Priebus made public the GOP Autopsy  (his name for it, not ours).

The 100-page report opined, on the subject of women,

… it is important to note that 40 percent of female voters are single and that Obama won single women by a whopping 36 percent.The RNC must improve its efforts to include female voters and promote women to leadership ranks within the committee. Additionally, when developing our Party’s message, women need to be part of this process to represent some of the unique concerns that female voters may have. There is growing unrest within the community of Republican women frustrated by the Party’s negative image among women, and the women who participated in our listening sessions contributed many constructive ideas of ways to improve our brand with women throughout the country and grow the ranks of influential female voices in the Republican Party.

Included in their list of 10 things the “reborn” GOP should do to court the female vote was this gem, at #5:

Republicans should develop a more aggressive response to Democrat rhetoric regarding a so-called “war on women.” In 2012, the Republican response to this attack was muddled,and too often the attack went undefended altogether. We need to actively combat this, better prepare our surrogates, and not stand idly by while the Democrats pigeonhole us using false attacks. There are plenty of liberal policies that negatively impact women, and it is incumbent upon the party to expose those and relentlessly attack Democrats using that framework.

To quote my grandmother, “Oy!”

As that video, released by the DNC  just a couple of weeks ago, demonstrates, the GOP operates under in “in one ear, out the other” policy.  Nothing has changed.

In fact, based on their actions over the last few weeks in Ohio, North Carolina, Texas, Wisconsin, and in the US House of Representatives where the Republicans in charge passed a bill banning abortions after 20 weeks after conception, it appears as the GOP war on women has returned in zombie form!  Nothing can stop them from making sure that all pregnant women carry their pregnancies to term so that the baby that is born can be denied rights, dignity and assistance from a GOP-led government that only cares about the wealthy and corporate “people”.

Out of their Do As We Do, Not As We Say files, Love the Fetus, Hate the Child.

Although a judge in Wisconsin yesterday issued a temporary stay on the new mandatory ultrasound law and another aimed at restricting women’s access to safe, legal abortions, the trend toward this type of legislation is on the rise, again.  The Washington Post on Friday published an article covering the latest round of  legislation aimed directly at women’s reproductive rights.

…Walker signed legislation requiring that women get an ultrasound before having an abortion and mandating that doctors who perform the procedure have admitting privileges at a local hospital. Opponents say the bill would force at least two clinics in Wisconsin to close.

The measures are part of a wave of abortion limits passed this year by conservative lawmakers and governors, who have approved more than 40 restrictions in statehouses around the country, according to data from the Guttmacher Institute, which tracks the issue.

The push has been aided by the expanded control of state governments by Republicans, who now hold a majority of governerships and legislatures and who enjoy veto-proof majorities in twice as many states as Democrats. Some of the measures were also fueled by outrage over the conduct of providers such as Philadelphia late-term abortion doctor Kermit Gosnell, who was convicted of murder charges this spring.

By mobilizing partisans on both sides, the abortion issue is poised to figure more prominently in the 2014 and 2016 elections than most strategists would have expected six months ago.

Sen. Marco Rubio (R-Fla.), widely seen as a presidential contender, is weighing whether to play a leading role on the issue bysponsoring a Senate bill to ban abortions 20 weeks after fertilization. Rubio is attempting to shore up support among conservatives who opposed his role in crafting a Senate immigration bill.

After Bob Ney checked in from the Talk Radio News Service to talk about the news of the day, I welcomed The Political Carnival‘s Paddy to the show, filing in today for GottaLaff.  We talked about Rick Perry opting against running for re-election in Texas, the circus that is the Zimmerman trial, and a lot more.

Tomorrow, Maysoon Zayid returns with a primer on Ramadan and more. Plus fabulous female facts from Amy Simon and Crooks & Liars’ John Amato.