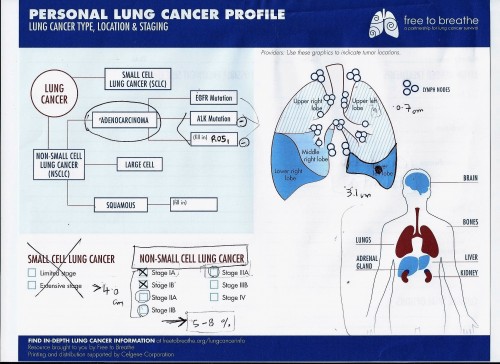 Yesterday, we met with Dr. Raja Mudad, who treats patients with lung cancer at Sylvester Cancer Center at UM. He was present at the tumor board conference where my surgeon, Dr. Dao Nguyen presented my case Thursday afternoon.

After all of this, the one thing we still know for sure is that my case is unusual and somewhat confusing.

That it’s confusing to me is an understatement. It caused the other oncologist we met with, a very highly respected and credible doctor, to contradict himself when David and I saw him last week, making me uncomfortable about putting my care and fate in his hands. (Read about that consultation here.)

I felt much better after meeting with Dr. Mudad, though no less confused or conflicted.

It was evident from the moment he sat down that Dr. Mudad was familiar with every aspect of my case. Still, he reviewed the whirlwind I’ve lived since the heart attack that wasn’t in early July when we discovered the mass on my lung, thanks to an x-ray done in the ER. From the CAT scan to the PET-CT, the lung biopsy, Brain MRI, EBUS test and beyond, we then got to the pathology results from my surgery, exactly three weeks ago yesterday.

The confusion comes in because my case is just unusual. I don’t want to say “rare,” as that hints at something more serious. But the cancer I have is NOT rare. Adenocarcinoma is the most common form of lung cancer, and mine was caught very early. Both of them.

Yes. I had two malignant tumors in my left lung. Two separate cancers. At least that’s what the doctors at the tumor board conference believe. Although there were many similarities between the primary tumor in the left lower lobe and the smaller one in the left upper lobe, they are not identical, leading the doctors to believe they’re two distinct cancers. But there’s no way to know for sure.

If they were the same, that would mean that the smaller tumor was a metastasis and chemo would absolutely be necessary. Cut and dry, no question.

Remember, all along, we’ve been told that if they were two separate, distinct cancers, surgery would be the cure. They’d be able to cut it out, get it all, and I’d be done. But since we can’t be certain that they are separate and distinct, and there’s still that spot on the right lung, and the lesion that showed up on the brain MRI (that the docs mostly all believe is a benign meningioma, but we can’t know for sure). Thus, the confusion and the dilemma and the questions about how to proceed. My inclination is to err on the side of caution and get the chemo, even if it would only add a 5-8% chance of helping to prevent the cancer from recurring.

But then I read up on the side effects and wonder if 5-8% is worth it.

The protocol would be 4 rounds of chemo, 3 weeks apart, using Cisplantin and Alimta. They’re the same drugs used to treat mesothelioma, and I’d be lying if I said I wasn’t nervous.

I’m not concerned about losing my hair. Hair grows back. I’m not even overly concerned with the nausea, as that goes away. I am worried about the peripheral neuropathy that is a common side effect from chemo and usually doesn’t go away! I’m already experiencing some of that neuropathy on my body – not where the incisions were, but around the front side of my trunk. It’s an odd combination of pain and numbness, and even the feel of a loose cotton shirt against my skin is often painful.

As for alternative therapies, there are many out there. To me, the most promising would make me a criminal. But I’ve read enough about the benefits of cannabis in not only treating chemo’s side-effects, but in killing the cancer cells itself to believe in its power, but I’m not willing to risk my life to prove it. However, I have begun taking cannabis oil to help the healing and will continue to do so, law enforcement be damned.

So that’s my dilemma. Our follow-up with Dr. Mudad is Tuesday, Sept. 27. Since we’re already three weeks post-surgery, if I am to start chemo, we’d need to do it soon.

One last point for tonight… I keep using the plural when talking about our decisions, our appointments, etc. That’s because my amazing husband, David Sloane, has been in this with me every step of the way. As he said to me shortly after we got the diagnosis, “We got cancer. We will fight this together.” I couldn’t ask for a more caring, loving and helpful partner in life and in sickness. I can’t imagine having gotten this far without him by my side.

So, that’s where we are. Feel free to weigh in in the comments section. This is a big decision, and I’d love to hear from people who’ve been through chemo, especially with Cisplatin and Alimta. To Chemo or Not? … that is the question.