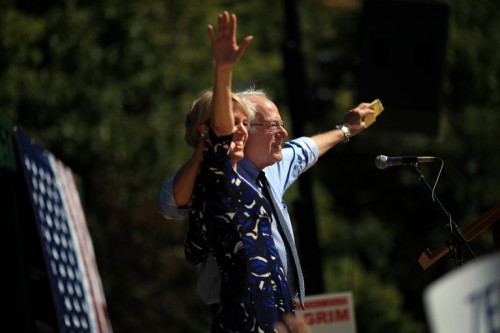 Bernie Sanders with Zephyr Teachout in New Paltz, N.Y. on Friday. Ms. Teachout is running for the House of Representatives. NY Times.

Are we all in love again yet?

Come ON?! We are well under fifty days out here progressive peoples!

Must be time for an injection of Bernie.

The New York Times reports that from Zephyr Teachout to HRC, The Bern has his groove back and is uber-rebooted for the final round.

NEW PALTZ, N.Y. — This crunchy college town, between the Hudson River and the Catskill Mountains, feels like an ideal place for a Woodstock attendee to retire. Amble down Main Street, and you’ll see a yoga studio, a gluten-free bakery and a clothing store called the Groovy Blueberry. “I’m already against the NEXT war,” a passing bumper sticker reads.

Would that we all had a liberal utopian New Paltz nearby, so it was the choice to relaunch #OurRevolution up and down the ticket. Sanders was thought to be charged and ready, in the opinion of The Times Emma Roller further down the piece.

Now that his presidential ambitions have been dashed, Mr. Sanders seems to understand that his role is to act as a sort of political conduit, transmitting progressive voters’ undying love for him to state and local candidates. And, he hopes, getting Hillary Clinton elected president, too. Few of the young people I talked to at the rally had heard of Ms. Teachout or the congressional race. But Mr. Sanders had brought them there, and they were open to learning more. 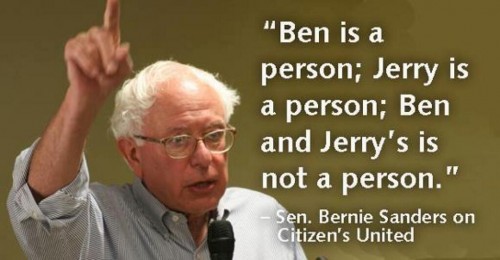 Bernie’s message of course, has not changed. He made that Fiji Water clear. Turns out that Zephyr Teachout fans are savvy progs. Makes for some fresh perspective re ye olde “protest vote” as a moral and ethical dilemma even a Greek oracle would cringe at. Roller continues:

In an appearance on MSNBC’s “Morning Joe” last week, Mr. Sanders urged young voters not to get “hung up” on the story of the day, but to look at the real policy differences between Mrs. Clinton and Mr. Trump, especially on climate change, women’s health, gay marriage and student debt.

“Before you cast a ‘protest vote’ — because either Clinton or Trump will become president — think hard about it,” he said. “This is not a governor’s race, this is not a state legislative race. This is the presidency of the United States. And I would say to those people out there who are thinking of the ‘protest vote,’ think about what the country looks like and whether you’re comfortable with four years of a Trump presidency.”

For this unique generation, Trump stands for virtually all of the infectious, regressive mucus ‘the kids’ are so vocally and vehemently against. Feels like Vietnam, along with hard-won Civil and Women’s Rights were but training seminars for this endless era of upheaval. 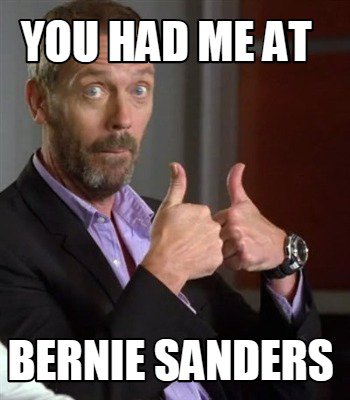 Bernie speaks his truth like no other. Which allowed each of us to turn down the static and hear our own voices, value our selves. That passion is still out here, in spades and ideologically un-Trumpable.

Don’t let it dissipate. An embrace of Clinton being seen as ‘politics as usual’ may well be accurate … about virtually any political star. Every two to four years. Consistently. Small d democracy was a necessarily messy business from its origin. Christianity certainly didn’t straighten it out, either.

Trumpism will grow so long as we allow it to. Who sets the political agenda?

We do. The crusade of our progressive Political Revolution indeed continues.

Turn your own reboot into a real time GOTV force of nature … it has never been more important than this powerful piece of hefty, historical now. 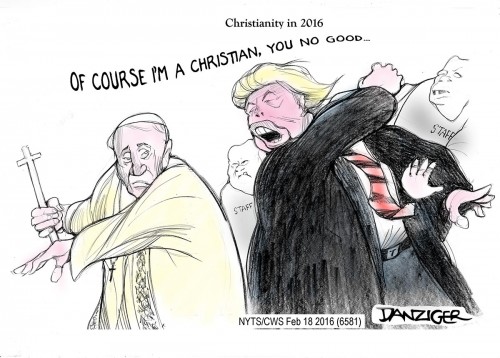 Jeff Danziger, of Vermont, via.