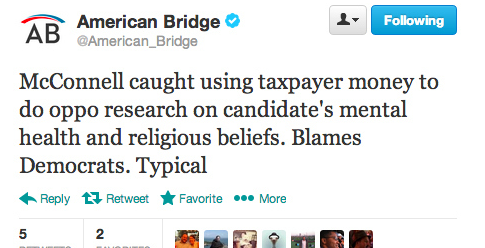 The ugly part of politics is the politics.  “Oppo Research” is an ugly necessity for anyone in a campaign. You have to know who your opponent is, especially the ugly parts of their history.

It’s the ugliest part of the ugly side of politics, which is in itself, usually an ugly game.

But not all candidates use the oppo research they gather in the same way.  There are some unspoken “gentlemen’s rules” – but it seems as if Mitch McConnell doesn’t know or care.

Mother Jones, the go-to magazine if you have a surreptitious recording to leak these days, broke a story about  a leaked tape of a McConnell campaign oppo research meeting, with discussions of how they might attack actor/activist Ashley Judd over her mental health history and religious views.

From my vantage point, it wasn’t what was said that was shocking and/or disturbing, but what wasn’t said.  Nowhere was Mitch McConnell heard raising any objection to “going there”… no mention of the fact that it isn’t ethical or reasonable to attack an opponent on those fronts.  Just silence.

And when McConnell was asked by reporters yesterday whether or not he thought those roads were reasonable ones to go down, he didn’t answer. Instead, he answered a question that wasn’t asked, playing the victim and claiming that his headquarters had been bugged, a la Nixon.  Seriously…

Today on the show, we talked about the long-awaited Obama budget which goes against everything the Democratic Party supposedly stands for by proposing cuts to Social Security benefits and raising the cost of Medicare to seniors.

Here’s the White House explanation for what they did:

In the meantime, we on the left weren’t taking this sitting down. A coalition of progressive organizations mobilized to collect over 2.3 million signatures against these proposed cuts, and a group of them, led by Senator Bernie Sanders, delivered them to the White House yesterday.

Although this budget will go nowhere, it’s still something we must push back against.

I spoke about that with Dave Johnson, a friend, and fellow at the Campaign for America’s Future.   We also picked up where I left off yesterday in condemning Harry Reid for not fixing the filibuster. Dave wrote about it in the very snarky post “Reid Threatens Sternly Worded Letter Over Continuing Filibusters“.

We also talked about the gun legislation, and more…

Plus Amy Simon joined in from She’s History to tell us about another Margaret….

And finally, if you’re in South Florida and want to see some great live music this weekend for a truly important cause, check out the Tortuga Music Festival.  Yes, I’ll be there!