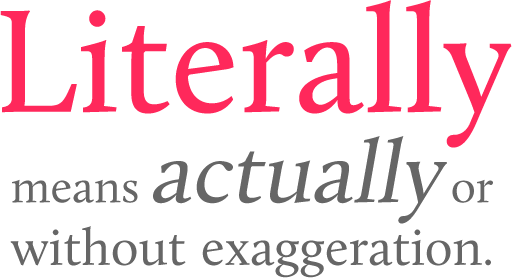 I’ve recently made a concerted effort to stay away from playing clips of right wing nut jobs on my show, but sometimes they say things so absurd they figuratively make my head explode! There were two such incidents yesterday that metaphorically drove me crazy.

I know Joe Biden gets chided for his misuse of the word “literally“. But it seems that when he does it, it’s little more than an annoyance or something easily mocked.

But Rush Limbaugh is supposed to be a professional broadcaster. His stock in trade is words! The clip below is a perfect example of why that blowhard doesn’t deserve even a fraction of the money he duped his employers into paying him or a fraction of the audience they claim actually listen to his spewage.

I don’t blame you if you literally get sick at the sound of his voice. For you, here’s the transcript of what he said (emphasis on the misused words are mine):

First of all, “literally” means actually or without exaggeration! And to be “literally paralyzed” means  that one is “partly or wholly incapable of movement”.

My father was literally quadriplegic – literally paralyzed from the neck down – after an enraged employee pushed him over an office gate, causing him to hit his head on a desk and suffer a spinal cord injury. That’s literal paralysis.

What Rush Limbaugh is so awkwardly describing above is his own racism. Literally.

The second clip that figuratively made me nuts came from Bill O’Reilly, the self-anointed arbiter of rewriting history. He does it daily on his Fox News (sic) television show, and occasionally writes books about the “killing” of historical figures that seem to have nothing to do with actual history and fact! So, is it possible the author of the idiotic  Killing Lincoln really has no idea that Abraham Lincoln was known for his great sense of humor?

Today on the show, I explained why Alex Sink lost (again) in her bid for the FL-13 Congressional seat that opened with the death of Bill Young. The problem is fairly simple and I hope the DCCC/DSCC/DNC pay attention. Alex Sink lost because she is a Centrist Democrat! Telling people how you’ll cross the aisle and work with the party who’s trying to take away your newly-gotten access to health care, cut Social Security benefits, do nothing to expand Medicare and further undermine all true Democratic (and democratic) principles will not get people excited. If they want a Republican, or Republican-lite, they’ll vote for the real deal.

Democrats don’t typically turn out in mid-term elections or special elections – unless you give them something they can get really excited about. We want elected officials who actually stand for Democratic principles.

Plus, what do you expect from FloriDUH?

Susie Madrak of Crooks & Liars joined me in the first hour to talk about the enlightenment of Dianne Feinstein! Now that the CIA invaded the privacy of the Senate Intelligence Committee’s computers, she’s finally outraged over the violation of her 4th Amendment rights! Oh, the hypocrisy.

Susie also broke the news that Democracy for America‘s great Night School trainings will be streamed live at Crooks & Liars! Starting Monday evening, get involved! I’ll share the details on Monday, but put it on your calendar now!

And finally, former Think Progress blogger (now grad student) Zaid Jilani wrote a great piece on his personal blog called “How Working in Washington Taught Me We’re All a Little Like RT America” – a great piece that underscores my constant admonitions about how the content of the “news” is tainted by its corporate overlords, and further warns that questioning authority is not a bad thing.

Tomorrow, fighting back against the status quo —  I’ll be joined by Shenna Bellows, a true progressive(!) candidate for the US Senate from Maine, running against Susan Collins.  And we’ll end the week with some absurd humor as Julianna Forlano returns to the show (I hope….)