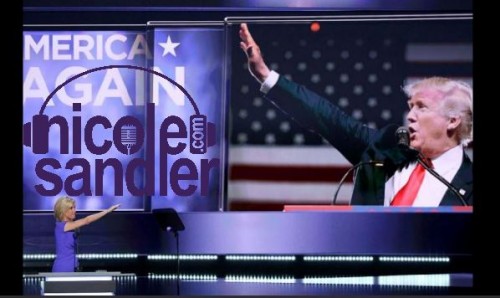 It’s finally Friday, after a long, exhausting week. Not only were our nation’s most troubled people on display for the whole world to ogle, the lead sociopath could very well be elected President of the United States. Opposite world, indeed.

The Republican convention finally ended last night, and next week it’s on to Philly. We’ll be checking in with our Bernie delegates on the ground to give us the scoop on what goes on inside the arena.

In the first hour of today’s show, I ran through some of the more surreal moments from the GOP confab, with an assist from Julianna Forlano (and a YouTube cameo by baby Lucia!).

In the second hour, I welcomed Dr. Jill Stein, the Green Party candidate for President, back to the show. I would have preferred for a bit more back and forth conversation, but I wanted her to be heard, so I mostly just let her speak. Next week, I’ll open the phones to get the listeners thoughts on what she had to say.

I won’t be here on Monday, as I have my initial consultation with the oncologist that afternoon. I promise to keep you posted as we go along. After all, you’re going through this lung cancer journey with me.

I’ll put together at Best Of show to run on Monday… and I’ll see you back here Tuesday to take on the world.