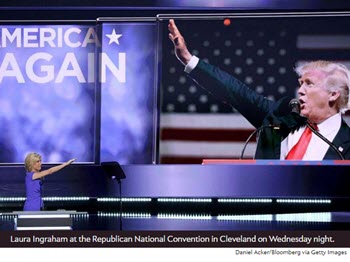 This post is not as thorough as I’d like, because my attention is divided today, but jotting down a few thoughts will help get these feelings out of my system. Please bear with me.

Trump’s done it. He’s compelled me to write about him in a way I’ve resisted for a very long time: Comparing him to Hitler.

I consciously resist references to Hitler in general because so many people throw those around way too often, way too casually, and way too inappropriately. But after watching Trump’s speech on the final night of the fiasco that passed for a Republican Convention, and after his unauthorized use of the song “All Right Now” to comfort the masses, the parallels were hard to ignore.

Here’s what I found when I Googled “Why did Germans support Hitler?” (bolding is mine):

A well-respected German historian has a radical new theory to explain a nagging question: Why did average Germans so heartily support the Nazis and Third Reich? Hitler, says Goetz Aly, was a “feel good dictator,” a leader who not only made Germans feel important, but also made sure they were well cared-for by the state.

“Feel good dictator.” “Made sure they were well cared-for…” And one other quote from the article was, “most Germans saw Nazism as a ‘warm-hearted’ protector.”

So see? No worries, my fellow Americans, everything’s going to be “all right now” under Trump’s watch:

Now let’s take a peek at just a few excerpts from Don-Don’s speech, via the Los Angeles Times and Vox. Again, bolding is mine.

Daddy’s here. And he can fix everything. Not only that, he can do it all by himself!

And speaking of Daddy giving us everything we’ve always wanted, that was also the message that came directly from his children. Daddy took care of us, he was the best dad EVER, and he’ll take care of you the very same way.

I’m sure they weren’t referring to Daddy Dearest making tasteless comments about dating his own daughter Ivanka or those little “love pats” following her adoring speech:

And finally there’s that pesky authoritarianism, via Vox:

Not only did authoritarianism correlate, but it seemed to predict support for Trump more reliably than virtually any other indicator…

This trend had been accelerated in recent years by demographic and economic changes such as immigration, which “activated” authoritarian tendencies, leading many Americans to seek out a strongman leader who would preserve a status quo they feel is under threat and impose order on a world they perceive as increasingly alien. Trump embodies the classic authoritarian leadership style: simple, powerful, and punitive.

The power to whip crowds into a mindless frenzy is one of Donald’s fortes. Simple slogans like “Lock her up!” and “Build the wall!” come to mind. Scary stuff.

Hair, er, Herr Trump and his dangerous following– who are even scarier than he is since they’re the ones who could vote him into the White House– make many of us more than a little queasy. I’m no Hillary Clinton fan, but after witnessing the GOP spectacle this week, I hope voters agree that there is no way this amateurish, loutish, wanna be-dictator can ever, ever become president.