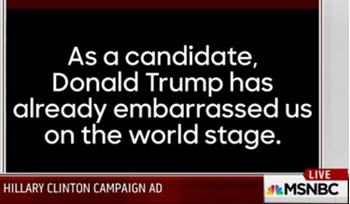 In case you’ve missed some of the recent news spotlighting the Donald Trump ignorance, dishonesty, narcissism, bigotry, and bluster that passes for his newest version of an immigration policy, here are a few highlights. Please watch the videos all the way through, they’re worth the time it takes, which isn’t all that much.

Nothing in his speech served to expand his reach among minority Americans. For some Republicans who have worked for decades to diversify their party, the result felt apocalyptic.

Mike Madrid, a California GOP strategist who has sought to broaden the party’s reach among Latinos and other nonwhite voters, declared himself “stunned” at Trump’s approach.

“We’re witnessing the end of the party,” he said. “I now know what my father meant in 1980 when he told me the party he grew up with” — in that case, the Democrats’ — “was no longer the party he felt comfortable in.”

Today Hillary Clinton came out with a brutal new ad. Works for me:

Also via the L.A. Times:

In a survey this year that asked whether immigrants today mostly “strengthen the country through their hard work and talents” or mostly “burden the country by taking jobs, housing and healthcare,” Americans by about a 2-1 margin said immigrants were a source of U.S. strength, according to the nonpartisan Pew Research Center.

Trump supporters, however, were notably different. About 7 in 10 voters who backed backed Trump during the primaries took the negative view of immigrants, Pew found.

On The Last Word, Lawrence O’Donnell had a thing or two to say about a thing or two. I recommend watching this one from beginning to end:

During his immigration speech Wednesday in Arizona, Mr. Trump said his border security plan would use the best technology, including above- and below-ground sensors to “find and dislocate tunnels and keep out criminal cartels.”

But no technology exists to reliably detect the tunnels, and experts say it may be years before such a system is developed.

Joy Reid subbed for Chris Hayes on MSNBC’s All In. Check out this conversation, it’s a doozy:

Joy Reid talks to Marco Gutierrez, founder of the group Latinos for Trump. Gutierrez says, “My culture is a very dominant culture, and it’s causing problems. If you don’t do something about it, you’re going to have taco trucks on every corner.”

And finally, the L.A. Times hauled out their Secret Decoder Ring and came up with a handy dandy guide to Trump’s idiocy: “Trump’s immigration speech decoded: What he said, what it means and how it would work”:

Homeland Security launched the Secure Border Initiative in 2005, and Congress later required double-layer fencing along the 2,000-mile border with Mexico. They quickly realized how hard it would be to finish. Anyone who has traveled to Big Bend National Park or the Arizona desert knows the unforgiving terrain.

Costs soared, hitting nearly $4 million a mile in some areas, according to the Government Accountability Office, especially when property was in private hands.

An effort to build a virtual wall was a $1 billion flop, though radar and tunneling technology are currently used.

The costs, the remote terrain and the reluctance of some landowners to turn over their property make a wall implausible. Trump has said it would cost $8 billion, but outside groups estimate it could be triple that price, according to PolitiFact.

And that’s just a taste.

Welcome to Planet Don-Don. May it forever leave our solar system and orbit a different universe far, far away and get swallowed up by the best, most spectacular, tremendous, ‘uuugest, bigly-est black hole you’ve ever seen, believe me.