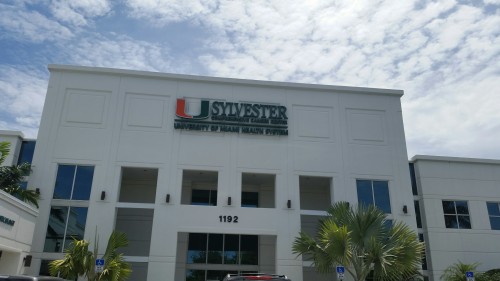 Our second surgical consult was with Dr. Dao Nguyen from University of Miami/Sylvester Comprehensive Cancer Center.

The photo above was at the Deerfield Beach clinic, 20 minutes from my home, where I’ll have my follow-up appointments if I choose to go with them.

Dr. Nguyen’s CV is truly impressive, as was he in person. He went over the reports with us and showed us the tumors on the CT scan, and gave his recommendations. Although his diagnosis and recommendation of surgery was  consistent with Dr. Robinson’s at Moffitt the day before, his approach to surgery is different.

In most cases, during a lobectomy the cut (incision) is made at the level of the affected lobe. The incision is most often made on the front of the chest under the nipple and wraps around the back under the shoulder blade. The surgeon gets access to the chest cavity through the exposed ribs to remove the lobe.

In some cases, a video-assisted thoracic surgery (VATS) is used to do a lobectomy. This is a less-invasive procedure. With this type of surgery, 3 or 4 small incisions are used instead of one large incision. Small tools are put into the chest cavity. One of the tools is called a thoracoscope. It’s a tube with a light and a tiny camera that sends images to a computer screen. This shows the internal organs on the screen. The small tools are used through the other incisions to do the surgery.

Simple common sense tells me to go for the minimally invasive surgery as opposed to having my chest and back cut open and ribs spread. Although there is disagreement on the efficacy and safety I found more than enough evidence to decide that minimally invasive surgery is the right way to go.  From the European Journal of Cardio-Thoracic Surgery (my choices of reading material has changed a lot since this diagnosis!):

Dr. Nguyen explained to us that he uses the da Vinci Surgical System. Yes, it’s robotic surgery, and it’s fascinating!

This video isn’t him, but it is amazing.

Dr. Nguyen has performed over 350 of these surgeries and, per his bio,

Since joining the University of Miami, Dr. Nguyen has transformed the section of thoracic surgery to become an independent service line with clear mission and vision of being the best general thoracic surgery service in Florida and beyond.

Minimally invasive thoracic surgery (MITS), particularly robotic surgery, has become the standard of care at our institution.  Robotic surgery has been performed at UM Hospital since June 2012.

Dr. Nguyen was among the first few surgeons in the country to use the third generation robotic platform, the DaVinci Xi, for thoracic procedures; the first to use the new integrated EndoWrist staplers.  He was also involved with research and development of next generation staplers for the robotic platform.  More than 80% of thoracic surgery cases are MIST.

Dr. Nguyen is current the co-leader of the Site-Disease Group (SDG) Lung of the Sylvester Comprehensive Cancer Center (SCCC) and presides the Thoracic Malignancy Tumor Conference.  He performs many complex thoracic surgical procedures referred to SCCC/UHealth.

He recruits and mentors young attending thoracic surgeons.  The current associate is Dr. Villamizar who was recruited to join Dr. Nguyen after he completed his training at Harvard University (The Peter Brigham and Women Hospital, Boston).  He collaborates with Dr. Villamizar to develop the malignant pleural mesothelioma program in Florida.

His research interest is translational research for new diagnostics as well as therapeutics for lung cancer.  His new direction of clinical research is surgical economics and outcomes of robotic lung resections.

He wanted one more test before scheduling surgery – a pulmonary function test. So that’s scheduled for Thursday, down at the main UM/Sylvester Cancer Center campus, so we’ll get to see the facility then too.

As much as we liked Dr. Nguyen and as impressive as are his credentials, it was the other thing that won me over.  Before we left, he took out a business card, turned it over and wrote a number on it. As he handed it to me he said, “That’s my cell phone. I give it to all my patients.”

Next on the calendar – On Wednesday, we meet with Dr. Edward Savage at Cleveland Clinic in Weston, FL. He also uses the da Vinci robot, and also has a great reputation.

On Thursday, it’s the pulmonary function test & tour of the facility at UM/Sylvester.

And then I have a big decision to make.