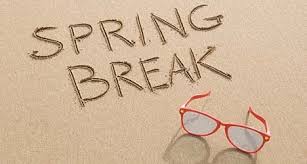 It is spring break in South Florida this weekend, but it’s actually more like Spring Broken!

First, the obvious! Technical problems prove that my system is broken. I tried to fix my phone problems over the weekend and seem to have made matters worse (damned Mac update!). I’ll try to fix those problems before hitting the air tomorrow morning.

The other broken things just might be above my pay grade!

Today marks the 25th anniversary of the Exxon Valdez disaster – and 25 years later, we’re all still paying the price. Shannyn Moore was there and wrote about it. For just the facts, click here.

Meanwhile, Galveston Bay is dealing with its own spill, as a tanker rammed a ship on Saturday and spilled upwards of 168,000 gallons of “sticky, gooey, thick, tarry stuff.”  Broken!

This morning, I had a brief conversation with Huffington Post’s Kate  Sheppard about those disasters.

In the second hour, as we do every Monday morning, I chatted with Nicole Belle of Crooks & Liars about what happened on the Sunday talking head shows in a segment we call “Fools on the Hill”:

Shakespeare once famously deemed life “a tale told by an idiot, full of sound and fury, signifying nothing.”  I’m not as nihilistic as old Will, but I do think that the Sunday Shows could fairly be described as such.

I ask you, is there a bigger idiot in the Sunday punditry than David Brooks?  Listen as he emphatically insisted that “you don’t go invading other countries”, conveniently ignoring his relentless cheerleading for exactly that for the entire Bush administration.

Well, maybe an argument can be made that Rich Lowry is trying to one up Brooks for idiocy, especially as he insists that the GOP has an alternative to Obamacarethat will save money and cover more people.  Uh huh. And if you believe that, I have some beachfront property in Iowa to sell you.

When the best analogy to world events highlights your incredible incompetence and utter wrongness, what’s a Neocon to do? Go Godwin, of course.  So Paul Wolfowitz has to liken the Ukrainian crisis to the Nazis.

And there’s no better example of sound and fury signifying nothing than failed candidate Mitt Romney suggesting that he could “see the future” and could have stopped Russia from invading Crimea if only he had been elected.

And finally, even though he was paired with bullying conservatives Tom Cole and Dan Senor, determined to filibuster any and all subjects, Congressman Keith Ellison insisted that their defense of Hobby Lobby means they believe corporate “personhood” should trump the liberties of real people.