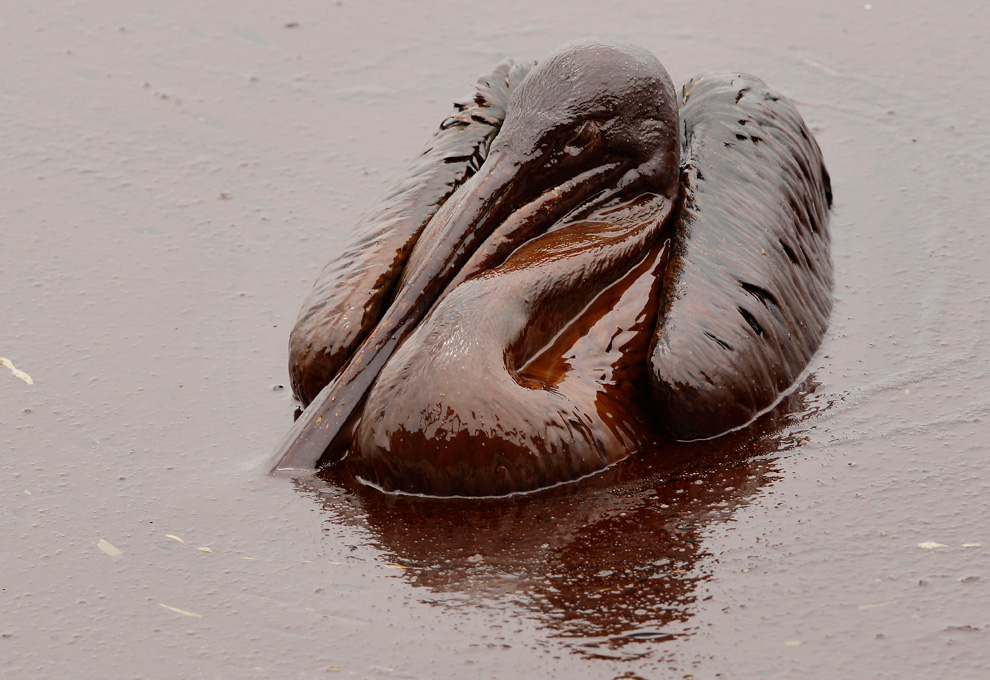 When the Deepwater Horizon rig exploded on Earth Day – April 20 – I don’t think any of us ever thought we’d be here today, talking about the disaster it started.

But here we are, 45  days and somewhere around 185 million gallons of oil spewing into the Gulf later, we’re hearing more BP horror stories and seeing horrific images of of birds and marine creatures dead and dying.

It’s the unimaginable, but it’s real. And with each passing day, it’s more and more apparent that no one – not BP, not the government – NO ONE KNOWS HOW TO STOP IT!

Rick Outzen, publisher & editor of NW Florida’s alternative weekly, The Independent, has been doing a great job covering the disaster for The Daily Beast.  Today he wrote of BP’s Windfall for the Rich, the latest example of BP saying “fuck you” to the people whose lives they’ve destroyed.

After speaking with Rick, I turned to Dr. Michael Domeier, an expert on great white sharks. Dr. Domeier led an expedition to Mexico’s Guadalupe Island, where he captured great white sharks, attached long-term tracking devices to them, and released them back into the Pacific. It’s fascinating to watch, and you’ll be able to, as it’s all documented in Expedition Great White, a new series premiering on the National Geographic Channel this Sunday night.  I did ask Dr. Domeier about the future of sharks in the Gulf of Mexico, and his answer was not at all encouraging.

Victoria Jones checked in with an update from the Talk Radio News Service.

And then I spent the rest of the hour talking about the oil tragedy in the Gulf with Gotta Laff of The Political Carnival.

There’s a movement afoot to Seize BP’s assets… If you’re so inclined, check out www.seizeBP.org, sign their petition, and find a protest near you.

I’d like to leave you with something fascinating for the weekend… At the beginning of the show, I recounted the strange vision my daughter and I shared last night.  Actually, she first told me she saw it Tuesday night. She had been sleeping, and came into the living room where I was watching TV.  She told me she saw some strange lights in the window of her room and she was scared.

I thought she was dreaming, or just wanted to stay with me, so I let it go.  But then it happened again last night.  So I went with her into her room to investigate.

What I saw scared the shit out of me too.  There were two bright neon glowing green lights, moving around down near the bottom of the sliding glass door in her room.  At first I thought perhaps it was a cat or rat (I’ve seen a few of them lately), but then the lights shot straight up in the air and flew away.  I was freaked, though I didn’t tell my daughter that.  I did, however, let her sleep in my room last night.

This morning I noticed a bug on the floor by the front door, not unusual here in South Florida.  I picked it up with some tissues and tossed it in the toilet. It was then that I saw the glowing neon green eyes!

Thrilled that we didn’t have an alien stalking us, I went online to try to find out what the creepy crawler was.  And it seems to be a Click Beetle.

I came across the blog TheYak.com which described an encounter eerily similar to ours.  And they were quick enough to pull out a video camera and capture the “alien” on tape.  This is exactly what we saw.

Here’s another video of the click beetle, this one with some light around it

Let’s hope they get the oil geyser to stop gushing soon, so marvelous creatures like these can keep scaring the shit out of us in the middle of the night!

And one last thing, BP is sorry.