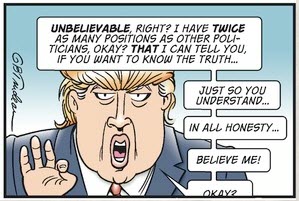 Trump now not expected to take questions in Mexico, despite his campaign manager insisting this morning he would.