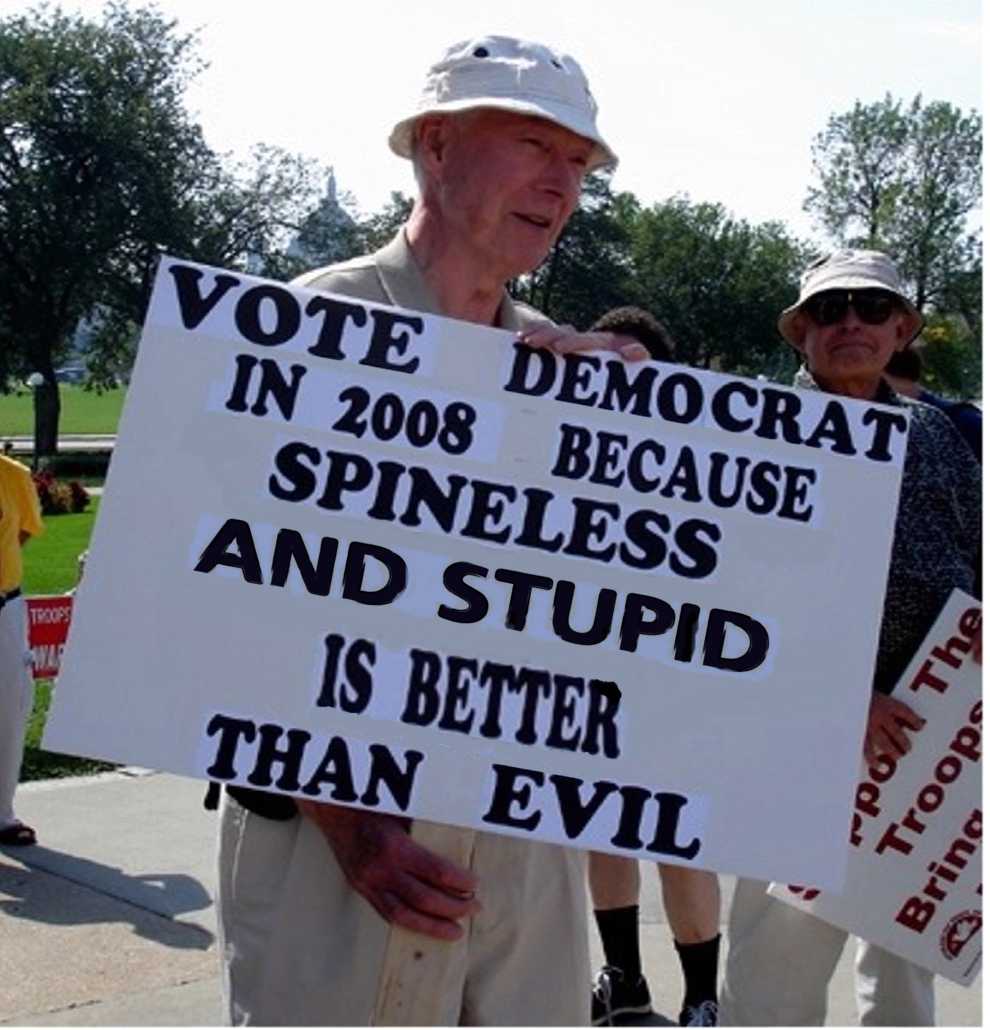 We’re just three weeks and a day away from election day.  I know, midterms don’t excite the masses, and the Dems aren’t exciting the base.  But the old adage of voting for the lesser of two evils should be on everyone’s lips today.

I’m in the process of moving in with my boyfriend who lives in Florida’s 22nd Congressional District.  This place drives home the meaning of that statement.  I’m no fan of Ron Klein‘s… but not for the reasons the Republicans are telling me not to vote for him.  Klein is just too damned conservative for me.  However, one look at his opponent Alan West, and I’m ready to do all I can do to get Klein re-elected.

In case you’d like to learn a bit more about the candidates who are in the national spotlight today because both President Obama and Speaker-Wannabe Boehner will be in town campaigning for Klein and West, respectively, take a few minutes to watch the televised “debate” they did yesterday, and figure out which is the lesser of two evils.  By the way, you get the extra added bonus of seeing a “debate” between the candidates from Florida’s 25th Congressional district too: the wonderful Joe Garcia and the truly heinous David Rivera.

On today’s show, in the wake of the Supreme Court’s Citizens United ruling which basically says corporations are people and, as such, are entitled to First Amendment protection under the Constitution.  Of course, if corporations are people, they should be able to run for office, right?  So says Murray Hill Inc, who has launched a  campaign.  This morning, I spoke with their “designated human” Eric Hensel, about their candidacy.

I also reached out to Eric Boehlert of Media Matters, after receiving this lovely email this morning:

Washington, DC – Today, nearly three months after Byron Williams was arrested on his way to kill “people of importance at the Tides Foundation and ACLU,” Media Matters for America released “Progressive Hunter,” a report from journalist John Hamilton, who spoke with Williams at the California jail where he currently awaits trial. In his interviews with Hamilton, Williams described Beck as “a schoolteacher” and said “it was the things

[Beck] exposed that blew my mind.”

WATCH the video and READ the entire story

Excerpts from the interviews reveal the story of a man driven over the edge by conspiracy theories and extremist views promoted by media personalities like Beck, Michael Savage, David Horowitz, and Alex Jones.

And since it’s Monday, I spoke with Nicole Belle of Crooks and Liars, for our Fools on the Hill segment…

There are legitimate news stories and then there are media narratives.  News stories generally require journalism and investigation and can be costly.  News editors don’t like those news stories.  It’s far more cost-efficient to create media narratives that can be endlessly spun and reworked by a variety of bobbleheads on the 24 hour cable stations.   They don’t have to necessarily be true, but they make it much easier to fill 24 hours of content.

Crooks and Liars have been looking at these media narratives for six years now.  We try to shine light on them, debunk them or put them into context.  And we have a whole lot of false narratives we’re focusing on this Sunday.

First up is Chris Matthews.  Matthews has always had a hard time sublimating his love of pure politics with reality, but his question to his panel was just bizarre:

According to Tweety, the resultant national nostalgia brought upon by the release of George W. Bush’s new memoirs, Decision Points, will build a wave that will ride Jeb Bush into the White House.  Seriously, I don’t know what Tweety is smoking, but in what parallel dimension is a book full of lies and spins for what is arguably the worst presidency in the history of the country going to make the American people wistful for another Bush in office?

And one of the biggest reasons that no one should wish another Bush presidency was on Fox News Sunday.  Karl Rove was feeling quite tetchy over the fact that Obama called him out for his political group (with Ed Gillespie) that is funneling millions of dollars from undisclosed donors into Republican campaigns and was completely disingenuous in his defense.  In true neo-con Freudian fashion, Rove accuses President Obama of something that he himself is no doubt guilty of: having an enemies list.

This Week invited Connecticut Republican Senate candidate Linda McMahon on to discuss her candidacy and her past as an executive with the WWF.  One of the things that Christiane Amanpour brought up is the sexism within the WWF, asking her if she would do anything to curtail such sexist acts as asking a woman to get on all fours and bark like a dog.

There’s a funny meta moment to the Mark Kirk/Alexi Giannoulias debate on Meet the Press.  The Kirk campaign and the NRSC were so confident that Kirk would dominate the discussion that they put out a press release crowing about Kirk’s performance and that Giannoulias’ performance highlighted how not ready he was for office.  Only problem?  They put it out before the show was filmed.

They clearly didn’t count on David Gregory to actually do his job and confront Kirk about his 180 degree turn on deficit spending.  I gotta say, it doesn’t sound to me that this is one of Kirk’s greatest moments, despite the press release.

Finally, we get to Joe Klein.  On assignment for Time Magazine, Klein ventured out of the Beltway confines to talk to voters.  Guess what he found?  People in this country don’t really care about what the media finds fascinating.  This is a profound “come to Jesus” moment for Klein, tampered somewhat by the pursed lips and condescension of Peggy Noonan.

While Noonan is eager to keep her self-appointed title of grand doyenne of the fashionable Republican set, the truth lies right there in Klein’s reporting, as much as he could grasp that differed from his own media bias. What they report on is not of concern to most Americans. We aren’t focusing on socialism, Marxism, deficit spending, tea parties and the like. They don’t impact most Americans for as much as they media love to discuss them. We’re not thinking about who will be the Vice Presidential running mate for Obama in 2012 or which of the myriad of politicos will be the Republican challenger. We don’t care, no matter how many times the media tries to make us care.

We ARE angry. We are feeling unstable, on dangerous ground and nervous about the future. But much of that anger also comes from feeling that the media isn’t listening to us or caring about our concerns. How many of those 99ers stressing about falling off the unemployment rolls would like to see a little socialism in this country to help them as they struggle with years of being unable to find a job? How many are wondering how much longer we’re going to send jobs to China only to have products returned to us filled with poisons or heavy metals that could kill us? How many parents are wondering how many deployments their child will have to go through (one of the service members in this week’s In Memoriam post has been on TWELVE deployments) before they can go home and attempt a semblance of a normal life again?

But these aren’t the stories that we see on Sundays, or any other day of the Washington news cycle. And Joe Klein just got a taste of it…what will it take to wake up more of them?