The Caucus, The Guns and The News 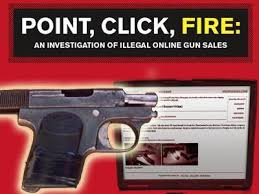 Welcome to the first election day of 2012. Except it’s not really an election, it’s a caucus – held in Iowa – and it doesn’t mean a damned thing.

The Caucus:  My friend Kenneth Quinnell of the Florida Progressive Coalition wrote a great piece for Crooks & Liars – Iowa Caucus Preview – and he joined me to talk about it.  We also discussed some Florida issues – including next Tuesday’s of the legislative session and the Awake the State rallies planned statewide that day.  Find the one closest to you and attend.  (I’ll be speaking at the one in West Palm Beach!)

The Guns:  In mid-December, NYC Mayor Michael Bloomberg’s office released the results of an investigation into online gun sales. The report, entitled Click Point Fire, found a “found a vast and largely unregulated market for illegal guns, with 62 percent of private sellers willing to commit a felony by selling firearms to people who likely could not pass a background check.”

This morning, I spoke with Bloomberg’s Chief Policy Advisor John Feinblatt about the report – and also threw in a few questions about the police behavior relating to the OWS protesters and Feinblatt’s wedding performed by Mayor Bloomberg on the first day same-sex marriages were legally allowed in New York.

The News: As we do every Tuesday morning in the second hour of the show, I chatted with The Political Carnival‘s GottaLaff about some of the news we might not have otherwise gotten today.  Today, she brought us these stories:

Iowa voters scared of President Obama… because he used to smoke

VIDEO- Rick Santorum: Barack Obama Should be Pro-Life Because He is Black

During the discussion about Santorum’s position on abortion, listener Susan sent a link to this story claiming the Santorums had aborted the baby whose fetus they then brought home (to show the other kids? Eew!)

One line in that piece

In his 2004 interview with Terry Gross, Santorum characterizes the fetus, who must be treated as an autonomous person, as a practically a gunslinging threat, whom the mother must murder in self-defense. Karen has had to justify her decision to save her own life by explaining that if she died her other children would have lost a mother.

made me go in search of that 2004 interview. I couldn’t find the audio, but did locate the transcript here, which includes this exchange:

TERRY GROSS: Let’s look at what the Republican platform has to say about abortion, and I quote: “We say that the unborn child has a fundamental individual right to life which cannot be infringed. We support a human life amendment to the Constitution, and we endorse legislation to make clear that the 14th Amendment’s protections apply to unborn children.” This would mean, I think, that an embryo would have the same constitutional rights as the pregnant woman carrying it. Is that right?

Senator RICK SANTORUM (Republican, Pennsylvania): That’s correct. It-I think it’s a fundamental belief that life begins when it’s-at conception because at that point, that egg and sperm that have combined are genetically human. They’ve all the chromosomes present of any other human being, and it’s living, it’s a human life and, as a result, should be protected by our Constitution and the 14th Amendment of the Constitution, which protects all life. And that’s the kind of inclusive society that the president talks about in his-when he refers to the culture of life and has been the position of the party now for at least, I think, 24 years.

GROSS: So, Senator, what are the legal implications of this if the fetus-if a fertilized egg basically has equal constitutional rights as the woman carrying it. If, for instance, a woman’s health is…

GROSS: …threatened by the pregnancy, what are the legal implications?

Sen. SANTORUM: Well, first off, the fertilized egg is a little girl or little boy. It’s not a fertilized egg anymore. It’s genetically not going to change at all. It is exactly as you or I or any other person in America or in the world was at that point in time in our lives and should be treated with respect as a result of it. What the implications are is that we have to honor and respect that, and we have to take responsibility for that child and protect that child until it is capable of providing for itself. And whether that means adoption or whether it means, you know, the mother…

GROSS: My question was if the health of the woman is threatened by the pregnancy and if the embryo has equal rights to the woman who’s carrying it, what are the legal implications about the woman’s health and her ability to abort?

Sen. SANTORUM: Yeah, if the case is a situation-and I think we’ve always made this clear. If the case was a situation between the life of the mother and the life of the child, then obviously that’s a decision where-we run into all the time in the law, which is if it’s two people’s lives then obviously you aren’t prosecuted for, in a sense, self-defense. If you’re defending your own life, then you can take the life of another to defend your own life. That is clear in the law. But as you know, 99-plus percent of abortions…

GROSS: So it would be the equivalent of, like, shooting somebody in self-defense?

Sen. SANTORUM: It’s exact-if that child is a threat to your life, then you have a right to defend yourself, in a sense, against this child. But as you know, over 99 percent of abortions in this country have nothing to do with the health or life of the mother. They have to do with the convenience or desire at that point in time in the woman’s life not to have a child and the child is killed because of…

Sen. SANTORUM: But-well, I understand that, but we have to look at the vast number of cases in which we’re dealing with the issue of abortion, and in the vast number of cases-you know, over 99 percent-we’re talking about abortion which is done simply because the mother no longer wants the child, not because there’s any health consequences or life consequences to the mother. And that’s why this is, you know-I can understand how people would obviously have exceptions for the life of the mother or maybe even some other rare circumstances like rape or incest or something like that, but the idea that this is an extreme idea that children and that all human life at all points in time in life should be protected and given constitutional protection and be treated in a dignified and respectable manner, I think, is something that every advanced society should have as its credo.

GROSS: But if a woman’s life isn’t threatened, but her health is likely to be compromised, should that be taken into account, or is that-does the…

Sen. SANTORUM: Again, the law speaks to that, and that is that you can use lethal force if lethal force is, in a sense, being used against you. In other words, if your life is threatened, then you can respond in kind. If something less than that, then you can respond in less than that. The interesting thing is, with modern medicine today, you know, there are all sorts of procedures available in which, you know, we can attempt to save the child. But there are times, as I think you’ve pointed to, where pregnancies, you know, may need to be terminated to protect the life of the mother. But with respect to health, there’s usually situations, again, with modern medicine, that we can deal with those to minimize any kind of health effects to the mother.

GROSS: Let’s get back to the Republican platform when it comes to abortion in addition to giving equal legal and constitutional protections to the fetus. The platform says, ‘We support the appointment of judges who respect traditional family values and the sanctity of innocent human life.’ Does that mean that in the Republican platform it basically says there should be a litmus test to appoint only judges who oppose abortion?

Sen. SANTORUM: I think what we’ve seen in practice is that the president wants judges, and Republicans usually put forward judges, who see their role as not creating new law but in fact the role of interpreting the laws of this nation within the realm of what the Congress intended. And that’s really what this point is about, which is, what happened in Roe vs. Wade and what’s happened in some of the other subsequent cases after Roe was the judges took on the responsibility of the Legislature and created law where it did not exist. There was no right to an abortion in the law and there was no right to an abortion in the Constitution. And it’s not the role of judges to create new rights when they believe they want it. That’s what the constitutional amendment process is about, and that’s what the Legislature and the Congress and the president and governors in the states are about. It’s about the people making these decisions as to what rights people should have as opposed to a few unelected judges sitting on high, dictating to us how we’re going to live our lives and run our country.

And so it is really that dichotomy between an activist judge who sees their role as to be sort of the warrior putting forth their agenda and imposing on the public, and, by the way, having no check or balance, because once the judge says this is the law, it’s very, very hard for a Congress or a president to overturn it, short of this rather cumbersome procedure called a constitutional amendment, which takes two-thirds of the House and Senate and three-quarters of the states. Yet to create a new constitutional right, the way we’ve seen it now in practice over the last 40 years, takes the stroke of a pen and four signatures assigned to it. Five justices of the Supreme Court can do what it takes three-quarters of the states and two-thirds of the Congress to accomplish. That’s not the balance that our Founding Fathers intended, and it’s this corruption of judicial power that this is aimed at.

GROSS: You say that you oppose judges who are activist with their own agenda, but could you argue that the judges the Republican platform calls for appointing are activist judges with an agenda? Their agenda is to overturn abortion and make it illegal.

Sen. SANTORUM: No, their agenda is to return to the traditional role of what judges are supposed to do in the checks and balance of powers that was established in the Constitution, which is the judges are there to interpret the law within the realm of congressional intent, not to be able to on their own create new constitutional rights without the process that the founders put forth, which is a constitutional amendment process. I understand it’s easier; I understand it’s quicker. I understand it’s less mess and trouble. But it’s not the way we should be changing our Constitution. So, no. We’re not saying that judges should come forward and say that all abortions are banned. What we should say is that this is a decision left up to the people of the United States to make in their state capitals and in the nation’s capital. That’s what the Republican platform calls for, that’s what Republicans generally have been calling for ever since 1972 and ’73, and that is to let the people speak on these very important moral issues instead of a select group of judges proclaiming from on high how Americans shall live.