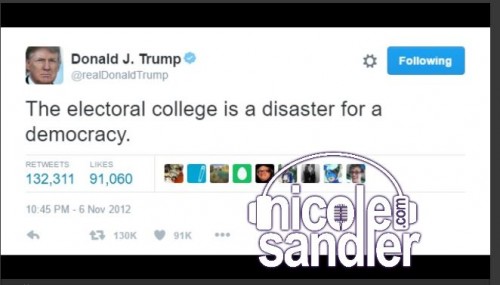 I’m back again, live in the studio, with a busy show.

Christine Pelosi (yes, one of Nancy’s daughters) is an author, activist, attorney — and a member of the Electoral College. Earlier this week, she wrote an open letter to Director of National Intelligence James Clapper asking for a briefing about the alleged Russian hacking of the DNC to influence the election.

We further emphasize Alexander Hamilton’s assertion in Federalist Paper #68 that a core purpose of the Electoral College was to prevent a “desire in foreign powers to gain an improper ascendant in our councils.” The United States intelligence community has now concluded with “high confidence” that a foreign power, namely Russia, acted covertly to interfere in the presidential campaign with the intent of promoting Donald Trump’s candidacy. During the campaign Russia actively attempted to influence the election outcome through cyber attacks on our political institutions and a comprehensive propaganda campaign coordinated through Wikileaks and other outlets.

The Electors require to know from the intelligence community whether there are ongoing investigations into ties between Donald Trump, his campaign or associates, and Russian government interference in the election, the scope of those investigations, how far those investigations may have reached, and who was involved in those investigations. We further require a briefing on all investigative findings, as these matters directly impact the core factors in our deliberations of whether Mr. Trump is fit to serve as President of the United States.

Then, to try to understand the hacking story, I called on Marcy Wheeler, the woman behind Emptywheel who provides the best analysis of issues pertaining to national security and governmental subterfuge.