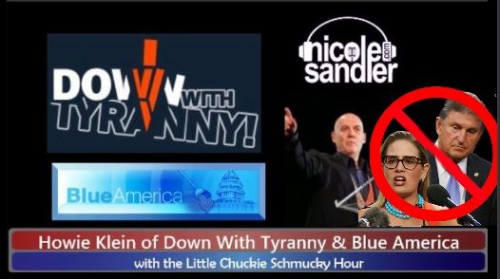 They engage in heinous, often illegal behaviors but accuse the Democrats of doing what they themselves are guilty of. It what I call “Opposite World”.

We’re experiencing it happening in real time and there’s seemingly nothing we can do about it. Well, we can call them out. And that’s what we’ll do today.

It’s Thursday, so Howie Klein is here and will certainly add some color commentary as we discuss the obstructionists, the liars, the members of the Republican wing of the Democratic party and a lot more…

At the beginning of the show, I told a disturbing story about a German/Israeli rock star, Gil Ofarim. He’s a German/Israeli dual citizen who lives in Germany. According to the video posted below, Ofarim says he wasn’t allowed to check in to the Westin Leipzig hotel, but was told he could if he removed the Star of David from around his neck. The rise of antisemitism is real, and it’s especially disturbing in Germany — where the site of the Auschwitz concentration camp was also vandalized at around the same time. Marriott, the parent corporation who owns the hotel, has not apologized. The last report says that the offending clerks were “suspended”. WTF?

This German-Israeli rock star Gil Ofarim was not allowed to check in to the Westin Leipzig in Germany (a @Marriott hotel) because he was wearing a Jewish star. He walked outside and recorded this video. Not much coverage of it. Let’s change that! pic.twitter.com/FxiKQSsPli