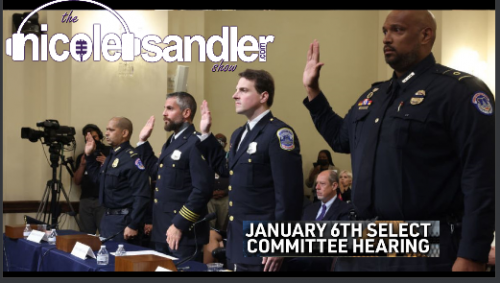 Devastating is the word that best describes the testimony by four police officers who helped protect the Capitol from the insurrectionists on January 6. Although we knew what happened and had already heard from some of these officers, today’s testimony was – well- devastating.

Today, I’ll share my thoughts and lots of audio/video from today’s hearing.

Instead of expressing outrage at the human misery of thousands of Cubans, there are many, including the Democratic Progressive Caucus of Florida, who failed to condemn these flagrant human-rights abuses and, instead, have chosen to endorse the big lie promoted by the dictatorship — that the U.S. embargo and Americans are to blame for Cuba’s dismal state of affairs.

That’s not only untrue, but he’s firing a shot at his own side!

What prompted that attack? Here’s the original statement from the DPCF on the situation in Cuba.

Read on and see how wrong Manny Diaz got it:

Florida Progressives Urge Immediate End to Cuban Embargo
The Democratic Progressive Caucus of Florida has released the following statement:
The Democratic Progressive Caucus of Florida calls on the Biden Administration for the complete and immediate repeal of the United States embargo against Cuba. The Cuban embargo, initially instituted some sixty years ago, is inarguably one of the greatest failures of American foreign policy in modern history. As thousands of Cubans take to the streets of Havana and Miami, we must recognize that the conditions pushing them past their breaking points are in no small part exacerbated by the United States’ embargo against Cuba.
The embargo deprives the Cuban people of resources, contributing to deteriorating infrastructure and poor access to food and basic needs. Simply put, it starves the island and the Cuban people suffer as a result. From the earliest days of the pandemic, Cuba continued its longstanding program of providing medical and humanitarian aid to nations in need across the globe, sending doctors to Italy for example. But in Cuba’s hour of need, its biggest neighbor even stops medical supplies for life-saving vaccines from reaching the island. This is injustice, this is cruelty, and we refuse to let it be done in our name.
“As an American of Cuban descent myself, I plead for President Biden to act quickly. I’m fortunate enough to not have family on the island and can only imagine the anxiety and panic felt by Cuban-Americans who are not able to see or help their loved ones. Had the Trump Administration continued to improve relations with Cuba instead of rolling back the Obama-era improvements, everyday Cubans on the island and Cuban-Americans would be able to comfort each other. The situation has escalated now where only a full repeal of the embargo will alleviate the suffering from the pandemic,” said Michael Calderin, president of the DPCF.
While craven politicians like Marco Rubio and City of Miami Mayor Francis Suarez try to score cheap political points by calling for ridiculous Twitter bans and twisted fantasy airstrikes they know will never come, the DPCF demands the one thing that the United States has within its power to do right now that we know will immediately and measurably improve the lives of the Cuban people suffering on the island: President Biden, lift the Cuban embargo now!
No matter your side of the aisle or wing of the party, no rational argument can be made that the Cuban embargo has been anything other than an abject failure, having made the United States a foil for the Cuban government to remain in power. The only true victims are the Cubans on the island who suffer and starve and die under the weight of their superpower neighbor’s decades old blockade, and the families forced to watch it happen, day after agonizing day, from a short 90 miles across the Straits of Florida.

This is the response from the DPCF.
No wonder we keep losing in Florida.
Unfortunately, audio issues prevented me from airing the interview on today’s show, so here it is
By Nicole Sandler|July 27th, 2021|Tags: Capitol, Carolina Ampudia, Cuba, Florida Democratic Party, insurrection, Jan 6, Manny Diaz, Miami, select committee|0 Comments