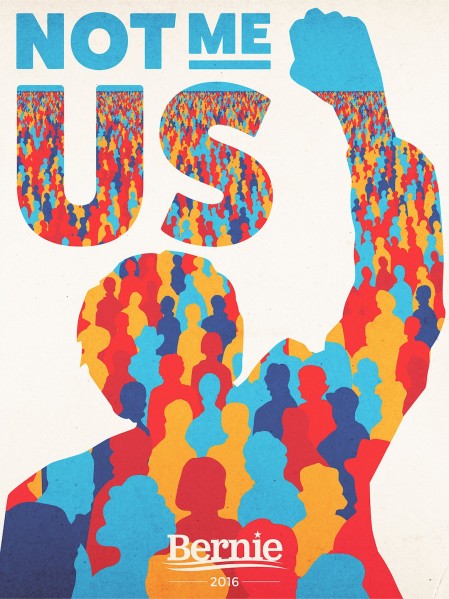 It was NEVER about Bernie; it was about his ideas. But today, the vitriol from some of his “supporters” is ugly and stinging. Take, for example, this message I received from a now-former listener.

I am very sad and angry knowing one of my heroes is just like all the rest. I foolishly believed that Bernie Sanders was someone I could trust and believe in only to find he’s no different then any other politician. Bernie is dead to me as is his movement and any policy or person he puts forward for office in the future. I had intended to vote for Stein but will now vote for Trump. I hope JUDAS Sanders is real proud of himself.

I told the guy he was an asshole and not to contact me again. I have no patience for that shit. Perhaps I should have just sent him this statement from People for Bernie, who hit the nail on the head!

The political revolution doesn’t end today. It is merely entering a new phase

The political revolution has entered a new era. First we changed the political landscape for the 2016 election. Now we will get in gear to change politics and society the only way that works: from the bottom up.

Bernie’s endorsement of Clinton represents both an end and a beginning. The campaign we have been active in is nearly over, but a new one starts today. Elections are opportunities to engage politically with our fellow citizens. While voting and endorsing is often a pragmatic decision, participating in a movement is a moral one.

Many Democrats, including grassroots as well as tops, are invested in the status quo. They haven’t faced a populist challenge in many years. Now they have. Under this new political landscape, we all need to figure out how to move forward. One key lesson: holding Clinton and the Democratic Party accountable has been, and will be, good for the movement. But that doesn’t mean we belong to an anti-Clinton or anti-Democrat movement.

At this time, People for Bernie recommits itself to the fundamental principle of “We Not Us.” We are loyal to the movements for change in this country, not the political elite; not even ‘our’ political elites. We will work every day to fight systemic racism. We will fight for tuition free college. We will work to end the stranglehold of money in politics. We will never give up on single payer healthcare, defeating bad trade deals, banning fracking, securing living wage for all, and enforcing our rights to join a union. Winning these issues requires majorities of voters in district after district, all across the land. Winning those majorities requires organizing outside and inside the Democratic Party. That’s why you have to take the issues that matter to you to your local Bernie group and organize together.

We know that the public sympathy and support for our demands extends far beyond our numbers. They go far beyond the combined groups, votes, and rally attendees. We pulled the plug on the media’s virtual game, where the country is hovering at center-right to far right politically. There are millions of Americans, citizens, immigrants, and soldiers, urban and rural, who are becoming democratic socialists. Even more inspiring, they’re acting on it, running for office and taking over the Democratic Party at the local level.

When we face the reality of a new status quo — Hillary Clinton as the Democratic Party’s nominee — there is a strong temptation to yield to the demands of the nominee. That is past practice. But this is no ordinary campaign. We are not a Bernie Sanders fan club. The timeline of a movement is far longer than an election cycle. We will engage in a diversity of tactics in which voting is just the bare minimum. We will take the streets, occupy the voting booth and de-center the Democratic Party establishment — forever.

As Bernie says, enough is enough. Together, our movement created a significant inflection point in American politics; but we have more to do. The political revolution doesn’t end today. It is merely entering a new phase.

We hope you’ll enter that new phase together, and preserve the strong bonds of love and unity that united so many for so long. The most important thing we can do is love each other and build strong local movements.

The entire People for Bernie family

PS: So are we joining Bernie in endorsing Clinton? We aren’t. But we know a process is underway that will result in most Bernie supporters voting for Hillary Clinton. Our job, our passion, is to support YOU in whatever strategy makes sense for the group or organization that best represents your local efforts. Elections can divide us; but movements bring us together. Let’s hold that tension with dignity and respect.

I get it. I’m not thrilled with Hillary Clinton either. But having someone with a D next to their name instead of someone with an R next to his name in the White House is the preferable choice. I know, it’s like a choice between a heart attack and lung cancer (speaking from experience), but then you look at the bigger picture.
Four more years with the GOP controlling both houses of Congress would be bad enough. But having one of them in the White House who’d sign their horrific bills into law would be disastrous.
Our responsibility now it twofold: make sure D’ump does not get into the White House, and elect as many real progressives as possible to Congress so that, if HRC becomes president, she has no choice but to be the progressive she’s now claiming to be.
Again, we’d have some leverage if the Democrats take control. If the GOP runs the table, we’re fucked, and not in a good way.
Did you hear that Comcast has a nationwide phone outage today? The one day I really wanted to take your calls, I couldn’t. Thanks Comcast. Thankfully, my Skype was working so I could call out.
I invited Will Bunch on to help me make sense of Bernie Sanders endorsing Hillary Clinton. In addition to writing the Attytood blog at the Philadelphia Daily News, Will Bunch is the author of books including Tear Down this Myth and The Bern Identity.
And as we inch ever closer to the August 5 opening ceremonies of the Summer Olympics in Rio de Janiero, I had a wonderful conversation with Jules Boykoff, the author of Power Games: A Political History of The Olympics. We only scratched the surface, so check out the book, and hopefully Professor Boykoff will join us from Rio during the games too.
I plan on being here tomorrow to have some fun with FloriDUH and Deborah Newell. I do have an appointment with the pulmonologist tomorrow morning. If he can get me in for a CAT scan, PET scan or something else that will let us know what this mass is that’s camping out on my left lung, I’m going to do that, and we’ll run a best of show. So, we’ll find out tomorrow….
By Nicole Sandler|July 12th, 2016|Tags: Clinton, endorsement, Sanders|0 Comments