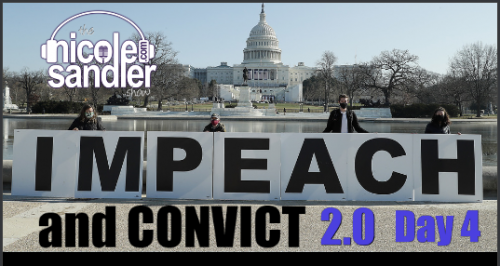 It seemed that we fell through the looking glass into opposite world today, as Trump’s ‘attorneys’ presented his defense. It was lies and gaslighting, followed by more lies and gaslighting. They only took about 3 hours of the 18 hours they were allotted. So, they took a brief recess and then went in to questions and answers.

I carried it live, and stayed on the air an extra half hour until the questions were done. They’ll be back tomorrow morning at 10, so I will be here too.

I’ll likely start a few minutes earlier, as some news broke after today’s show – and the trial- ended for the night.

CNN is now reporting that, while the Capitol was under siege, House Minority Leader Kevin McCarthy called Trump and begged him to do something to stop the insurrection, and he refused. The trial is still in progress, and tomorrow is the day that they’d call witnesses, if they’re going to.

I think they need to subpoena Kevin McCarthy to testify tomorrow, right now.

I only played one funny today, but it was short and perfect, so I played it twice. It’s from our friend Bruce W. Nelson, “Put Your Feet Up, Josh Hawley”. It was the perfect song for the occasion.

I also played the “Shut the Fuck Up Bitch” song for “defense attorney” Michael Van Der Veen. I promised I’d post it here. I finally found the video on Tik Tok

I still don’t know the name of the singer, though…