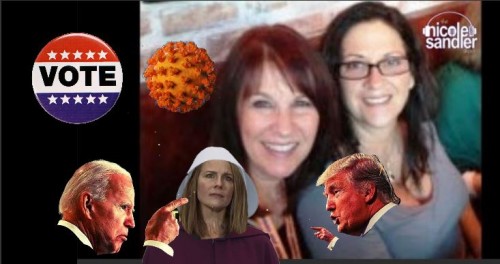 It’s the final Tuesday before election day or, more accurately, the end of voting in the 2020 election. It’s amazing that we’ve made it through almost four years of the most reprehensible creature to ever inhabit the White House’s rule. The end is so close, but yet so far away! We’re also in mourning today, as the Republicans succeeded in stealing another Supreme Court seat from America, as voting is already underway. Shameful.

But it is Tuesday, so GottaLaff is here. Don’t mind us as we’re kind of freaking out going into the home stretch…

I shared the news story about E. Jean Carrol’s defamation lawsuit against Trump— the judge ruled in her favor, saying that the DoJ can not replace Trump in the lawsuit, and that Trump was not acting in his official capacity when he denied the accusation.

“His comments concerned an alleged sexual assault that took place several decades before he took office, and the allegations have no relationship to the official business of the United States,” the judge wrote.

Today’s bit on humor was the perfect segue from that story. It’s from Jane Doe and the Me Toos, “She’s Not My Type”