Up Oil’s Creek Without a Paddle

I generally write this blog after my show, and use it to reiterate a few points and give the info on the content and guests.  I’ll do all of that… 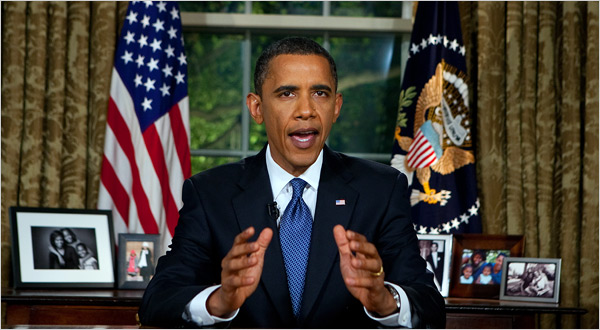 But immediately after the show ended, it was time to tune in to President Obama’s speech from the Oval Office regarding the biggest man-made environmental disaster in history. Today, government panel of scientists set up to examine the flow from BP’s blown out well said that between 1.47 million and 2.52 million gallons of oil is still gushing from the underwater geyser in the Gulf of Mexico every day.

Although no official has come out and said it, I’m reading way too many articles speculating that the procedures BP tried actually created more damage, and may have opened a fissure in the ocean floor. If that’s the case, even the relief wells they’re drilling may hold little promise.

I’m truly frightened for the future of the planet, and little said by President Obama tonight assuaged that fear.  During the speech, Obama said,

“What has defined us as a nation since our founding is the capacity to shape our destiny -– our determination to fight for the America we want for our children.  Even if we’re unsure exactly what that looks like.  Even if we don’t yet know precisely how we’re going to get there.  We know we’ll get there.

Seriously? That doesn’t give me much faith in the process.  And speaking of faith, the president’s closing comments relied too much on the Almighty for my non-believer sensitivities.

The oil spill is not the last crisis America will face.  This nation has known hard times before and we will surely know them again.  What sees us through -– what has always seen us through –- is our strength, our resilience, and our unyielding faith that something better awaits us if we summon the courage to reach for it.

Tonight, we pray for that courage.  We pray for the people of the Gulf.  And we pray that a hand may guide us through the storm towards a brighter day.  Thank you, God bless you, and may God bless the United States of America.

Again, if he’s counting on God and faith to get us through, I fear we’re up shit’s creek, drowning in oil, without a paddle… or a respirator.

What did I want to hear?  My fantasy had President Obama sounding like candidate Obama, telling us it was finally time for change. That the jobs we so sorely need in this country would come by way of his New Green Deal. We’d put the thousands of people out of work in the Gulf back to work (on BP’s dime) making and installing solar panels and wind turbines. And expand the program around the country to many of the other millions of unemployed people who are dying to get back to work.

I would have loved to hear our president express concern for the health of the workers trying to clean up the toxic soup, but he didn’t go there.  Although he pledged

“We will fight this spill with everything we’ve got for as long as it takes.  We will make BP pay for the damage their company has caused.  And we will do whatever’s necessary to help the Gulf Coast and its people recover from this tragedy.”

at least he didn’t repeat the egregious and, frankly, insulting statement he made yesterday while touring some of the oil-ravaged Gulf communities,

“I am confident that we’re going to be able to leave the Gulf Coast in better shape than it was before.”

In my fantasy version of tonight’s speech, we would have seen some of FDR’s spirit coming out of BHO but, alas, my expectations and -dare I say – HOPES were simply too high.

Now on to tonight’s show….

Earlier today I received a heartbreaking email from Merle Savage, who identified herself as a general foreman during the Exxon Valdez oil spill (EVOS) cleanup in 1989, and one of the 11,000+ cleanup workers suffering from health issues, without compensation from Exxon.

Merle has written a book “Silence in the Sound,” and launched a website devoting to searching for EVOS cleanup workers who were exposed to the toxic spraying and are suffering from the same illnesses she has.

Merle joined me on the show tonight, and told her heartbreaking story of suffering, more than 21 years after the spill.

Danny Tate came back on the show, just a few weeks after we thought his nightmare had ended.  In a nutshell, Danny was a successful singer/songwriter who had some substance abuse problems. His brother went to court and, in a hearing that Danny was not even informed of, was awarded a guardianship.  Over the last couple of years, Danny emerged from rehab clean and sober, but has been unable to shake the monkey of his brother and said brother’s attorney, who have drained his bank account.

You can read all the whole back story here. A few weeks ago, a judge gave Danny his life back. Or so we thought. Unfortunately, the judge must have been paid off, as he decided to let the brother’s attorney continue stealing what ever money Danny might have access to use to rebuild his life.

There’s a new website just launched at www.nashvillecriminals.info to address the abuse.

And finally, Brad Friedman of BradBlog joined me to talk about a story that no one is talking about. OK, they are talking about Alvin Greene, but seem to have missed the actual story. Listen to the interview, read Brad’s coverage, and help spread the word.

Tomorrow night, Mike Papantonio will join me to talk about what he’s doing to hold BP accountable for the crimes they’ve committed. I hope you’ll join us too…