Pence Triples Down On Serially Enabling The Dark Donald 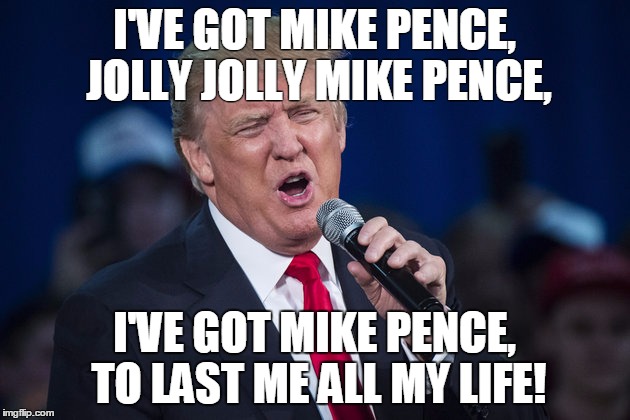 .
We may fiercely disagree with virtually every damnable thing uttered by conservative Bret Stephens of the Wall Street Journal, in ‘normal’ times, but he brings a superb analysis of the peculiar Pastor Mike Pence and other obsequious hangers-on camping in the rarified stench of Trump World.
.
The Puritan Pence is now weighted down with more consternation and outright in- “party” charges as a result … Stephens baldly named the obsequious governor’s human swamp of a running mate thoroughly out of control; and asserts that the alt-right Indianan shotgun rider is a Political Enabler.
.
Even a Moral Enabler.
. 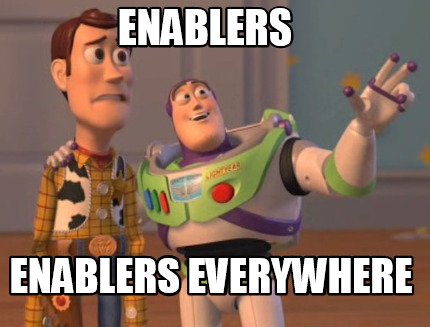 Go Evangelicals, you’ve hit the big leagues where cash and favors rendered  ALWAYS equals penance. The neon cherry on top: the political chance to battle on through yet another news cycle.
.
Following last Friday’s Access Hollywood video bomb and the wreckage it created, it is a particularly pivotal time to create the prerequisite  “electoral cover” for Cons to still vote for Playboy Donald (and his self-vaunted decades of aggressive moves on women).
.
Such a bloody shame for the Regressives that women will decide their thoroughly deserved fate next month.
.
From the Wall Street Journal .

Donald and the Enablers

Mike Pence might think of himself as an altruist or a hero. He’s an accomplice, by Bret Stephens

Donald Trump emerged the victor from his debate Sunday night with Hillary Clinton, which means he slightly exceeded expectations by not spontaneously combusting on stage, which means his ardent loyalists have again absolved him of sin. “Congrats to my running mate @realDonaldTrump on a big debate win!” tweeted Mike Pence as soon as it ended. “Proud to stand with you as we #MAGA.”
.
That’s “Make America Great Again,” though at this stage in the campaign it could equally mean “Mount Another Genital Assault.” 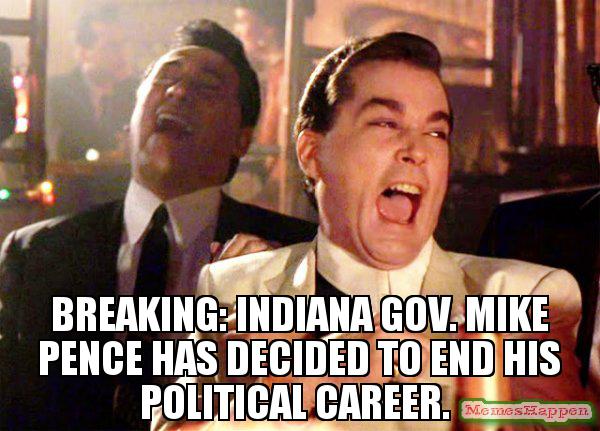 The Indiana governor is supposed to be the sober side of Trump-Pence, the guy who keeps cool, knows his policy brief and imposes ideological discipline on a ticket that would otherwise blow whichever way Mr. Trump puffs. But that misreads Mr. Pence’s role in this disastrous GOP season. Mr. Pence isn’t his boss’s junior political partner. He’s his moral enabler.

I use “enabler” in the psychiatric sense, meaning, as Merriam-Webster has it, “one who enables another to persist in self-destructive behavior (as substance abuse) by providing excuses or by making it possible to avoid the consequences of such behavior.” The enabler gets the kids to school when you’re passed out drunk, mops up the mess in the bathroom, pays the bills, and makes things seem OK when they aren’t. Enablers like to think of themselves as altruists or heroes. In truth they’re accomplices.

.
Enablers are a skeevy, parasitic breed of people or politicians. They act on hidden agendas, usually combined with scathing contempt for the weak, for the pitifully needy “enabled”.  And they need to know how to pronounce Corinthians II without a Sunday Schooler’s coaching.
.
Pence, Rudy Giuliani, a hidden Chris Christie and many a Holy Roller GOPPER are among the few supporters who have remained with Playboy Donald. They may have to imbibe their own nausea curbers to do so, but they plaster on a ‘please believe me” countenance and hit the cable news shows with appropriate vigor and a fine ability to dissemble ~ if not outright lie.
. 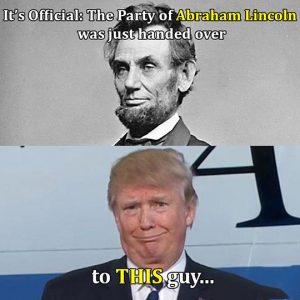 Truth is clearly optional for the Trump-Pence ticket. Particularly when more GOP brokers like Paul Ryan and John McCain (who EVER thought we’d assert that) have pulled their own ethics to the fore and in some ways have turned their backs on the pitiful Republican hopefuls.
.
The abhorrent revelations from the Access Hollywood Bus porno scenario must be terribly hard to swallow (or messily choke on and spit out, even Corinthians One never got that explicit in characters or plot lines.
.
As The Donald and tv host Billy Bush tittered on hot mics, objectifying, rating and sexually degrading women, the country and the Republican Establishment (what serves as that presently) got a naked view of T’Rump and his arrogantly misogynistic values ~ clearly attained over a golden lifetime of such Penthouse-ready masculine braggadocio and heinous acts.
.
Stephens continued , elaborating on much of the repulsion and angst progressives and sane Repubs find themselves swimming far far away from in the 2016 shark tank. His contempt is not hidden.

In the most hideous of Mr. Trump’s now-infamous sentences, it’s hard to decide which part is most repellent: the predatory verb “grab,” the dehumanized object “them,” or the pornographic prepositional phrase “by the p—.”
Normal people understand this, which is why Mr. Trump’s presidential chances are now next to nil. But his Republican enablers are not normal people.

You can say that twice then carve it on Donald and His Hair’s grave. Pence’s ministerial look and his caring conservative Evangelicals boarded the S.S. Trump. Loyalist and religious icon, Tony Perkins of the Family Research Council,  was able to don Trump’s dirty laundry by claiming “shared values”.

Seriously? Just what “values” do Perkins and the 70 year-old groping orangutang share? A deep need for public adoration prying money from Evangelical wallets? Perennially lording it over the “lesser” amongst them? 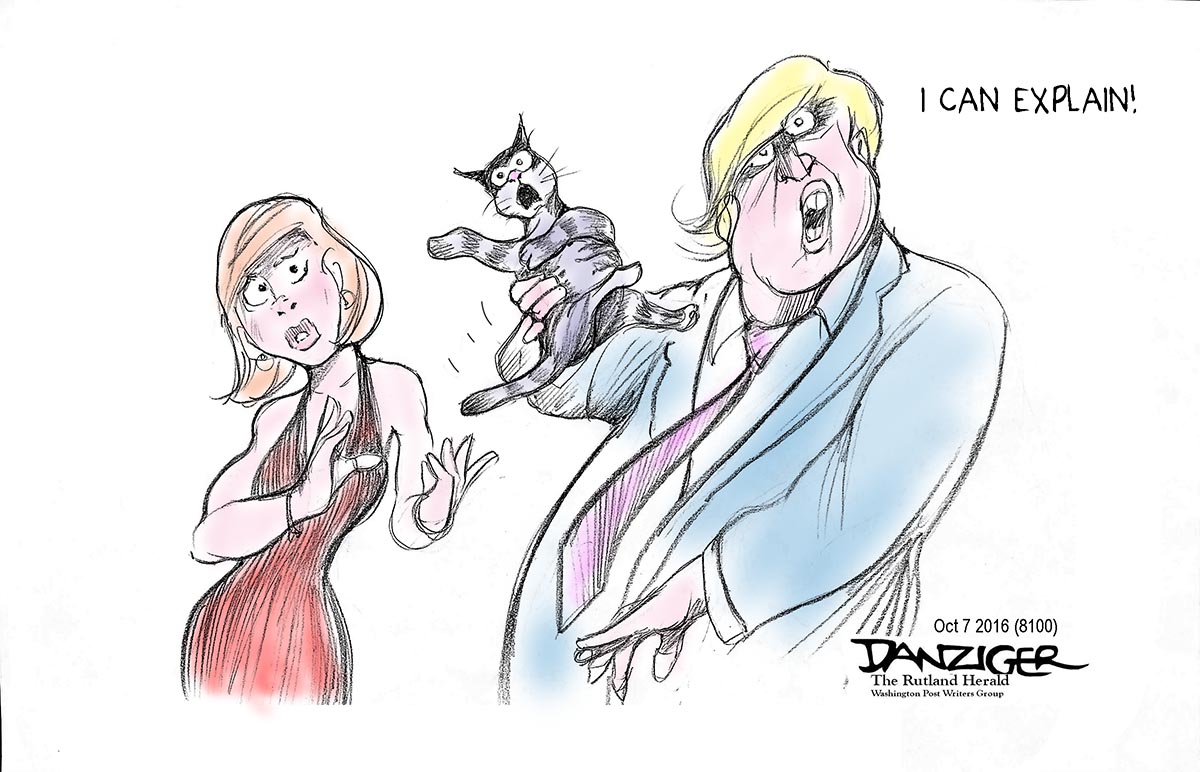 Stephens shared some putrid but plausible motivational causation by none other than Mayor Noun, Verb, 9/11. Huuuuuge Drumpf Enabler, is the rude Rudy.

Instead, Mr. Pence has thrown himself into the work with relish, constantly vouchsafing the character of “this good man” Donald Trump… Like every other enabler, Mr. Pence is desperate to make true what he knows is not.

If Mr. Pence is shocked, shocked to discover Mr. Trump is a cad, then he’s a fool.

In all honesty I never expected to nod in agreement with paragraphs of a Wall Street Journal OpEd on anything.
.
But this is also weighty evidence that what remains of the Republican Party is as bifurcated and chaos-driven as a Banana Republic in full-on political corruption slash oligarchy via open theft.  Stephens wrapped his editorial case with an irrefutable and well-tied noose:
.

My guess is that it means the current GOP is nearly beyond redemption.

On Nov. 9 Republican voters will likely wake up to the reality that they have lost the White House, again, and that they have nobody but themselves to blame, again. As with every addict and enabler, the surest path to recovery begins at rock bottom. 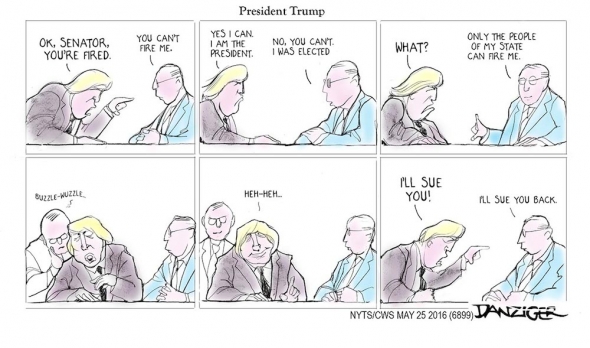 The Donald began his life and CV from moral rock bottom, gold escalator or no gold escalator. And as anyone living below a decent ethical sea level will verify, you can’t survive in that hell without partners on the dole spewing  desperate hope for daylight.

At this point Paul Ryan and the growing list of GOP evacuees appear, by contrast alone,  worthy of a wee sliver of respect… while this twin dose of cowardly Enabler / Opportunist are as low down as Rush Limpbalz and Sean Hannity.

Redemption has seemingly died on the table.
..
…