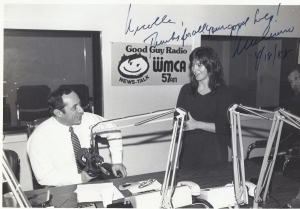 I was born in New York City, and lived in Queens until my family moved to Florida on the day I finished 6th grade. After graduating from the University of South Florida, I moved back to New York, working in radio there for five years (until a relationship brought me to Los Angeles- a story for another day).

I love New York, and will always consider it, in some sense, home.

I also adored Governor Mario Cuomo. The picture above was taken in 1984 or 1985, when I produced a monthly statewide “Ask the Governor” radio show. (Another aside: always sitting next to me in the control room while I screened the phone calls was Cuomo aide Tim Russert!)

Gov. Cuomo was not only a really great governor for the state of New York, he was a genuinely nice, caring person. He always remembered my name and would even comment on a haircut or something else that made me realize he actually paid attention to me (unlike his opponent in his first gubernatorial primary, then-Mayor Ed Koch who, although I had met him numerous times, always introduced himself as if it was our first time meeting).

My life could be very different now had I accepted Gov. Cuomo’s job offer back then. Unfortunately, he wanted me to work in his Albany press office. I may love New York, but it was New York City, not Albany where I wanted to remain, so I turned it down!

That said, to quote Howie Klein,

Don’t ever mix Andrew Cuomo up with his dad.

Howie explained why in a post titled, “Andrew Cuomo — The Richard M. Nixon of the Democratic Party?“.

Over the past week or so, we’ve learned that the younger Cuomo is embroiled in an ethics scandal, nothing new for New York politics, but something he had promised to stamp out. Meet the new boss, same as the old boss…

Thankfully, there’s a light at the end of the tunnel and her name is Zephyr Teachout,

Zephyr Teachout, a constitutional law professor and former national Director of the anti-corruption group the Sunlight Foundation, running as the progressive alternative to Cuomo.

I first spoke with Zephyr back in my Air America days, and was thrilled to see her name emerge in June as a potential Working Families Party challenger to Gov. Cuomo. We spoke back then, after politics got in the way, and she was still deciding whether or not to challenge Cuomo in a Democratic Party primary. Thankfully, she decided to do just that, and she chose a great running mate too!

Her selection for Lt. Governor, Tim Wu, is is a law professor at Columbia University and is most well-known for being the father of Net Neutrality. He’s also the son of two immigrants…. Zephyr framed the differences between Hochul and Wu very succinctly: “In the Hochul-Wu contest, Hochul represents conservative and fear-based politics, and Wu represents progressive and democracy-based politics.”

The primary is just a month away, so visit TeachoutWu.com and help if you can!

Today happens to be the 69th anniversary of the US dropping a nuclear bomb on Hiroshima. You’d think the world would learn from our mistakes…  It’s worth remembering what we did on that day.

Sadly, as I discussed with Susie Madrak in the first hour of the show today, it won’t take something as drastic as another atomic bomb to devastate life on the planet. We’re killing ourselves a little bit more each day, as she tells us in this article about recent revelations of methane leaking from the Arctic.

Tomorrow, if we’re still standing, I’ll be back with a busy show- Congressman Alan Grayson, economist Stephanie Kelton, cultural HERstorian Amy Simon and the No-More-Bullshit man himself, Stephen Goldstein. Talk to you then, Radio or Not!