Listen to this episode: {play}http://traffic.libsyn.com/radioornot/20120821_Nicole_Sandler_Show_-_Free_Don_Siegelman.mp3 {/play} 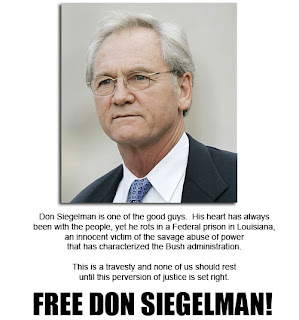 I’ve rarely been as upset about a story as I am about this one.  And actually, this isn’t just a news story, it’s a man’s life. Meet Don Siegelman.  You may remember him as a rising star in the Democratic party out of Alabama.  That’s right, a Democrat from Alabama.  Perhaps that’s why he was targeted.

To make a long story short, Don Siegelman is a political prisoner.  Actually, he was, and is set to return to prison again on September 11 if nothing is done before then to save him from insane punishment for a crime he didn’t commit.  Not only did he not commit a crime, no crime was committed, period.

I’m not going to recount the story here. The best thing you can do is read, watch and listen to the mountains of information on the website at DonSiegelman.org, and please sign the petition at Change.org/PardonDon.

And watch/listen to the interview we did this morning.

And most importantly, share all of it.  We need to step up and do the right thing for this man who was targeted by Karl Rove and the American right.

The other big story of the day is the insane rhetoric from the Republican party concerning rape. To quote the president, “Rape is rape”.  As much as Paul Ryan and Todd Aiken would like you to believe that there is a difference between “forcible” rape, “legitimate” rape and just pain old rape, IT’S ALL RAPE!  And Paul Ryan is right there with Todd Aiken in believing that there should be no exceptions to the laws against abortion, even for victims of rape and incest.

Not only that, but it appears as if that notion just might be in the GOP official platform. (It is, as of now.)

In the second hour, as we do every Tuesday morning, I chatted with GottaLaff of The Political Carnival.  We spoke a lot about the Aiken/Ryan/Romney/GOP idiocy, and also hit on some of these stories:

Did Team Ryan try to get all those Florida Republican seniors drunk enough to cheer his speech?