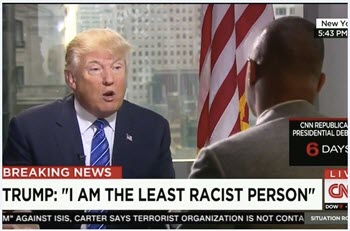 Last night I took a screen grab of a tweet by GOP presidential candidate Donald Trump’s campaign spokesperson Katrina Pierson. I did that just in case she felt compelled to scrub it. I don’t remember a time when I’ve gotten such a huge reaction on Twitter. I mean, when you get retweets from Patton Oswalt and Josh Malina, you know you’re onto something.

Trump claims to be “the least racist person that you have ever met,” yet ironically, he consistently makes comments and pushes policies that contradict that statement. He also makes a point of hiring people who have their own racist histories. Trump recently made Stephen Bannon his campaign’s “CEO.” Bannon oversaw Breitbart.com, an “alt right” (euphemism for white supremacist) site. Rachel Maddow covered that here.

Katrina Pierson, per Raw Story and the Twitter example below, has a “long history of outrageously racist tweets.”

Here’s the one I grabbed (h/t: @WallaceRitchie): 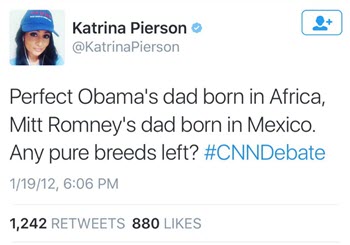 And yes, it’s a real tweet. Here’s a link to the original.  If that link stops working, then that means she’s deleted the tweet, which, again, is why I decided to take a screenshot.

If that wasn’t enough nausea inducement for one day, here’s a snapshot I took of my teevee machine last night of a graphic on The Last Word with Lawrence O’Donnell. The quote is, allegedly, from Trump: 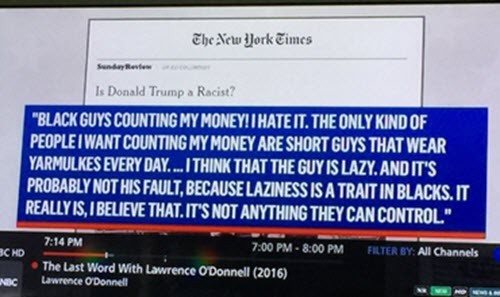 Here’s the video of that segment. The quote comes in at about 9:30:

So, Donald, how’s that outreach goin’ for ya? Asking for a friend.