Just when we think Trump and his spinners couldn’t do more to repel women voters of any party … or none … the Great Swamp GOP machine produces more Odious Donald Ick to wade through.

.
Wear your best Orvis waders for this one. In fact, get three pairs on eBay and simply go single-use on this level of poli-nuclear waste. The Grand Old Party of white men has gone full-on retrograde, and the stink and spillage are spectacularly smellier than Seinfeld’s hyper-strong B.O. in his Saab.

Like the Seinfeldian B.O., it ain’t easy to dispel and thwart all of the epic Repuglican raw sewage. It will NOT go away without extreme progressive measures.

To many of us progressive dames (and the men who dig us), this 2016 race of the general election has been right up there with vaginal wands, a Regressive political asshat actually defining ‘legitimate rape’  and The Donald plus His Hair bloviating in his skeevy misogynistic proclomations that “A person who is very flat-chested is very hard to be a 10,”

[as he told Howard Stern].

This problem is by no means limited to Trump tearing down Fvx Noise’s Megyn Kelly, Rosie O’Donnell, HRC, Whoopi Goldberg, HRC, the flat-chested Princess Di, HRC … add your own names to the list. Trump once told buddy Howard Stern he ‘trusted’ his then-girlfriend Melania/temporary wife “so much that he doesn’t pull out during sex.”

Bravo, you sexist and fleshy orangutan. Hearing you say you’d ‘do’ your own allegedly Ten of a daughter were bloodlines not in the way should have been the ultimate precursor to piggish postulations nationwide.

House Republicans have a woman problem: GOP leadership is at risk of being all-white and all-male next Congress

For more than a decade, the number of Republican women in Congress has remained roughly stagnant. The share of Democratic women — now nearly 33 percent — has continued to climb, while the Republican female share has leveled off since hitting 10 percent during the mid-2000s. Currently there are just 22 women in the Republican caucus of the U.S. House of Representatives. Democrats have 62 women in the House. With the retirement of two female representatives and another congresswoman losing her primary fight to a Republican man (nearly 14 percent of the women in the GOP conference), Politico Magazine recently noted exactly how unrepresentative House Republicans have become in 2016:

In contrast to Dems (significantly better) commitment to winning the Lady Vote, Repiblicon Wives, Daughters and Mothers alike have centuries of patriarchy in politics to undo.  Gains are made, then some jackass with a new definition of the atrocities of rape and slut-shaming runs amuk.

In Congress, Republicans can boast only two additional female lawmakers and virtually no other women in high-ranking leadership roles compared with 2006. Of the 21 House Committees in the Republican-controlled House, the only one currently chaired by a woman is the low-profile House Administration Committee. And Candice Miller, the seven-term congresswoman from Michigan who chairs the committee, is set to retire at the end of this term.

The same Salon author, Sophia Tesfaye, had some deeply encouraging words from President Obama to add to her premise.

.The president argued that since his election cooperation with Democrats and the White House has been viewed as toxic to the Republican base, which he says is clear in this election cycle. Obama complained about the lack of “classic deal-making between Democrats and Republicans” since his election, and focused much of the blame on “the balkanization of the media” and “political gerrymandering.”
Obama said that conservative members of Congress in safe Republican districts have been unwilling to compromise with him because they knew “all”of their constituents were “watching Fox News and listening to Rush [Limbaugh].”

The GOP War On Women is real. Somehow, even, real enough that various members of The Bush family tree of Kennebunkport Conservatives are doing a #NoTrump #NeverTrump gobsmacking path that includes hints of solid Clinton backing.

The Donald is not so popular with The Shrubbery.

.
Buzzfeed had a tally of some of The Very Worst of Drumpf.

Trump has a history of making crude remarks toward women. He reportedly said of his ex-wife Marla Maples, “Nice tits, no brains,” and more recently, he has called Fox News anchor Megyn Kelly a “bimbo” and a “lightweight” and said she had “blood coming out of her wherever” during the first GOP debate. 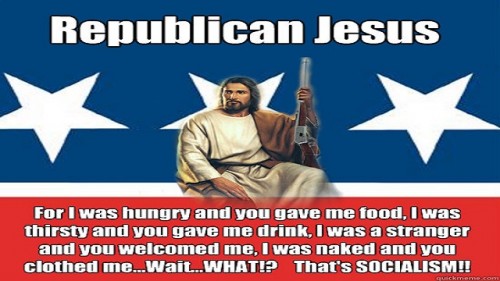 Take your nausea meds and have a disgusting listen. Apparently Donald thought Princess Diana needed some work, but she was “one that got away” from his gross and much-vaunted libido. Apologies for the Fvx.

Now if we women are meant to be barefoot, pregnant and in the kitchen (hopefully kitted out with potable water), we would very much like the details … and the necessary freedom to then suit up and fight back like Apollo Creed.  Because Hell No(!), we are not going meekly back to olden times for voluntary, blanket oppression.

Or worse. Watch the sales of chastity belts peak at Neiman Marcus this season.