I was honored to be in the studio on her last day. Not that I was invited, mind you. I just showed up. As I told her, I just couldn’t imagine sitting at home listening. So, I got her a balloon and a card and a bottle of champagne… and it was the definition of bittersweet.

But move forward we must… so, on the show today, we looked to the future.

Congressman Alan Grayson was on with me in the first hour. I asked him about the petition asking Nancy Pelosi to appoint Grayson as the lone Democrat to the Benghazi “Select” committee…  (yes, yes, yes – he’s more than willing and certainly the perfect person to hold their feet to the fire!). We also discussed the TPP, and the sad state of today’s media, among other things.

In hour two, Howie Klein joined in for our weekly “Steve Israel Hour, sponsored by Little Debbie” segment. Today, Howie announced the latest Blue America contest… anyone who donates to Alan Grayson via this page in the next week will be entered to win a Jimi Hendrix Platinum Record award for his first album, “Are You Experienced?”..  As Howie wrote:

I met Jimi Hendrix in 1967, before he went off to England and formed the Jimi Hendrix Experience. Musical talents like Jimi don’t grow on trees either. I watched him– he was Jimmy James then– play guitar at a John Hammond, Jr. show at a tiny NYC club, the Cafe Au Go Go. I asked him to come play at my college. He said he was leaving the next day for England but that he’d play my school when he got back. The following March he was back– on his first U.S. tour as the Jimi Hendrix Experience– and he remembered and played at Stony Brook, one of his first shows. Later I spent some time with him in Morocco and then saw him for the last time at the Isle of Wight Festival. Ironically, much later, after he had died so young and so tragically, I became president of his record label, Reprise.
Over my years at Reprise, I was given hundreds of gold and platinum record awards when our releases reached sales plateaus. There was never one I was more thrilled to have gotten than a platinum award (one million sales) for Jimi’s debut LP, Are You Experienced?
Grayson’s “Republican Health Care Plan” speech on the floor of the House was his Are You Experienced? moment. That’s why it was a natural instinct to offer to give that rare, collectible platinum award– RIAA-certified, of course– to an Alan Grayson contributor. That’s our Blue America “contest” this week. Just contribute– any amount– to Alan Grayson’s reelection campaign on this page and you may be the lucky, randomly selected donor who gets the Jimi Hendrix plaque as a thank you gift from Blue America. (In fact, if you want to plaque but can’t afford even a $5 contribution at this moment, send a post card to Blue America at PO Box 27201, Los Angeles 90027 and let us know you want the award too.) 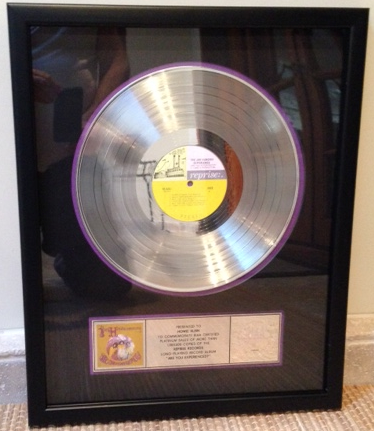 That’s pretty cool… but I already got my prize. Today on the show, I introduced the newest addition to our family. Meet Jaxson Brown, adopted from the Broward County Animal Care & Adoption Center on Saturday.

Until tomorrow… time for some more puppy kisses!