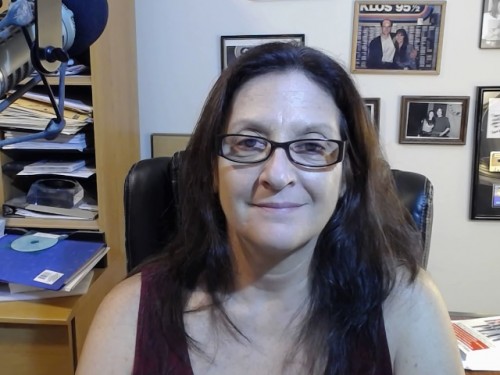 That’s me, sitting in my studio at the computer. I’ve been trying to start writing this post for about an hour now, but I keep getting distracted. I’m thinking it’s the drugs.

I’m only half-joking about the drugs. But I am, indeed, home, and feeling so much better than I felt in the hospital.

I will sit myself down at this computer to write as much as I can remember about the surgery and the entire experience of the past week. But I wanted to pop in now- now that I’ve been home for a full day to give you the important information.

The surgery went really, really well. It was supposed to take four hours, but only took half that much time.

The lungs are  comprised of five lobes. The right lung has three, the left has two – an upper and a lower lobe. 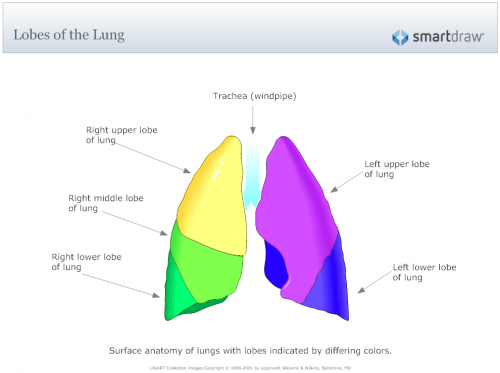 While I now have a fairly decent understanding of the lung’s anatomy, I’m in no way qualified to explain it to anyone else. So I’ve attached a graphic of the lung and its lobes.

I went looking for a description of how the lobes are attached and can’t find anything in plain English. But here’s a British textbook  technical description:

The lobes are characterised by a discrete connection with the first subdivision of the bronchial tree after the level of the principal bronchi to both lungs – these are the lobar bronchi. In a similar manner, the vascular, nerve and lymphatic supply from the hila to each lobe has minimal connection with other lobes. This makes the lobes relatively independent funtional units within the lung. Indeed, pathology may be confined to one lobe and corrective surgery may be facilitated by the clear demarcation between lobes produced by the fissures.

Further, the lobes are subdivided into bronchopulmonary segments which are volumes of lung with an organized arrangement relative to each other within a lobe and similar functional independence as the lobes. With further subdivision of bronchi, each segment is divided into secondary lobules.

The lobar fissures are often incomplete, making a connection between two apposed lobes. Conversely, more than the expected number of lobes may be produced by new fissures e.g. the azygous lobe of the lung. The additional lobes are termed ‘accessory lobes’.

Basically, if the lung is lying flat on its back, the lower lung is on the bottom, the upper lung sits on top of it. (I’m only dealing with the left lung today, but the same principle applies to the three-lobed right lung too.)

The “fissures” as mentioned in the paragraph above are basically what it sounds like.

One dictionary definition is

a :  a natural cleft between body parts or in the substance of an organ
b :  a break or slit in tissue usually at the junction of skin and mucous membrane

But when I look for a more clinical description, I get

Lung fissures are a double-fold of visceral pleura that either completely or incompletely invaginates lung parenchyma to form the lung lobes.

Each lung has an oblique fissure separating the upper lobes from the lower lobes and the right lung has a horizontal fissure that separates the right upper lobe from the right middle lobe.

There are numerous accessory fissures that are common anatomical variants.

My very basic understanding is that, in some people, the fissure is complete and only some thin membrane-like tissue connects the lobes. In others, the two lobes become almost fused together.

The surgeon said my lung anatomy was “perfect” (at least one part of me is!!), and the lobes were therefore very easy to separate, cutting the surgery time from an expected four hours to just two!

I had four small incisions and another one where the chest tube had been. I only have one stitch – at the chest tube site. In case you’re keeping track, the removal of the chest tube might be the most painful moment so far.

Once my fluid output had gone down to a certain level, they said it was time to remove the chest tube. Joy, the Nurse Practitioner who is my surgeon’s right hand and took care of me every step of the way (when the rest of the hospital didn’t – more on that coming soon), did it. She had me roll on my side and hold on to David’s hand. She counted to three, and told me to take and let out a deep breath (as if!), and she pulled it out. If that wasn’t excruciating enough, I thought she then put in a stitch with no anesthesia. But she explained that the stitch was put in during surgery; she just tightened and tied it. Ouccccch.

And I need to get Joy’s last name to properly give her credit and send her a thank you!!

I’m amazed by the incisions. I have four obvious bruises, which is where the DaVinci XI robotic arms went in. The source of the most pain right now is the largest incision, the one through which they pulled out the bag containing the cancerous tumors, the wedge from the upper left lobe and the entire lower left lobe.

I’m sad that I was out cold by the time I was wheeled into the OR because I didn’t get to see the actual machine or even the operating room — and a long slow descent into never-never land would have been so much more enjoyable. But the anesthetist gave me a shot of Versed to just calm me down a little in the pre-op room, and the next thing I knew I was waking up in my room post-surgery!

Of course, wanted to know every bit about what they were going to do to me, so I spent a few hours one sleepless night before surgery watching videos of the procedure, which are fascinating. The DaVinci XI robots are used for lots of different surgeries, especially by OB/GYN surgeons for hysterectomies. When you Google DaVinci XI surgery, you’ll get lots of those and more.

I Googled Lung Lobectomy DaVinci XI and in addition to about 8400 other results, my exact surgery was near the top of the list.

You’ll notice that they put the bad tissue into a bag. The bag is then pulled through one of the arms of the robot. Unfortunately, to fit it through, they have to make that incision a little larger, and that’s the spot causing the most pain. But it’s still only a fraction of a 5-inch cut and rib cutting and spreading that an Open Thoracotomy entails, and there’s no comparison. That’s a link to a video of that surgery which is so violent and ugly I won’t embed it here. You can click and watch it to see the difference.

Perhaps tomorrow I’ll get the courage to take a picture of the four punctures so you can see what it looks like. It’s incredibly amazing!

Now for the question I should have answered up top. Everyone is asking “Did they get it all?” Probably. We won’t know about the lymph nodes until the pathology comes back, which should be Tuesday (though Monday is Labor Day, so it might be Wednesday), and my follow-up appointment with the surgeon is Thursday morning.

He was able to tell us immediately after surgery that the mass in the upper left lobe is also definitely cancer, and said that he believes I will need chemo. This is confusing because for the past few weeks, everyone has said that if I have two primary cancers, once they removed the tumors, I’ll be “cured.” The only time they ever use the word “cured” in relation to cancer is when it’s caught very early (check), they’re able to remove the entire tumor(s) (check), and the cancer hasn’t spread to the lymph nodes(?).

Perhaps Dr. Nguyen saw something in the lymph nodes as he removed them that he recognized as not a good sign. Or perhaps the cancer in the Upper Left Lobe was more advanced than we believed due to how small it showed up on the CT scan and, under other circumstances they perhaps would have removed the entire left lung? At this point, I’m speculating. But come Tuesday morning I’ll be making appointments with 2 or 3 oncologists to get a first, second and third opinion on the pathology and course of treatment.

One foot in front of the other. It’s an ongoing process, and after each step there are more steps and more unanswered questions.

As I’m writing this, it’s now 8:10 PM. I’m due for my pain meds in 20 minutes. Even if I didn’t have it written down, I’d know because my body is already screaming at me. Dilaudid is one powerful and addictive narcotic, and I have no intention of letting a drug get the better of me!

I’m done for the night. We’ll make those baby steps because larger, faster steps are painful.

Thanks for caring and for your kind words. Talk to you tomorrow!