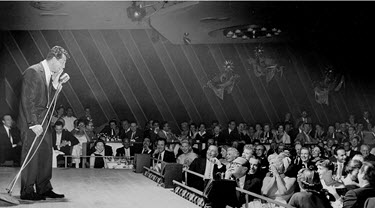 Last week the President of Mexico hosted DONALD TRUMP. It was just another example of a Mexican doing a job that Americans don’t want to do.

Upon arriving in Mexico, TRUMP looked around and said, “Wow, this place has more illegal immigrants than we do.”

As soon as TRUMP crossed into Mexico, even HILLARY CLINTON said, “OK, let’s get going on that wall.”

After insulting Mexico for the past year, things got a bit awkward when TRUMP made a speech after the meeting that started out, “Hola, Smugglers, rapists and thieves.”

During his big immigration speech in Arizona, TRUMP said if he’s elected, he will employ a “deportation task force.” I don’t think that will be necessary. If he’s elected most people will want to leave on their own.

He also said there will be “No Amnesty” for immigrants who come into this country illegally, which is very bad news his next three wives.

With all this, in California several dozen Latinos actually held a rally FOR DONALD TRUMP. They were a group calling themselves the “L.W.D.R.F.N” — “Latinos Who Don’t Really Follow the News.”

ANTHONY WEINER is back in the news with another sexting scandal. His Twitter account once again texted a picture of his “Hebrew National.” It was definitely WEINER’S. Like the former Congressman, it was leaning to the left.

At a press conference, WEINER admitted he sent out photos and after confessing that he and his wife are separating, he was all choked up and got a lump in his throat. Not as big as the lump in his photos, but still, very emotional.

SERENA WILLIAMS is making her bid for her 23rd Grand Slam title at this year’s U.S. Open Tennis Championships. We haven’t seen that many Grand Slams since CHRIS CHRISTIE had breakfast at Denny’s.

The California drought continues. It’s so bad in Beverly Hills, pregnant women are now being asked to sit on their lawns when their water breaks.

At a track meet last weekend, a 100-year-old woman won a Gold Medal in her age group, in the 100-meter dash. Her opponents dropped out of the race in 1987.

Former Texas Governor and presidential candidate RICK PERRY is a contestant on this season’s “Dancing With The Stars.” PERRY is very publicly opposed to gay marriage. So, if you’re wondering who’s going to have the WORST hair and makeup on the show, you’ve got your answer.

Monday is Labor Day. That’s why PRESIDENT OBAMA went to China. To celebrate our workforce.

Yes, it’s LABOR DAY…Established in 1894 to pay homage to the American worker. On this holiday families get together with kids screaming, traffic jams, picnics on dirty blankets with warm beer, cold hot dogs and potato salad garnished with ants. — All this to glorify work, so that the next morning you can’t wait to get back to it.