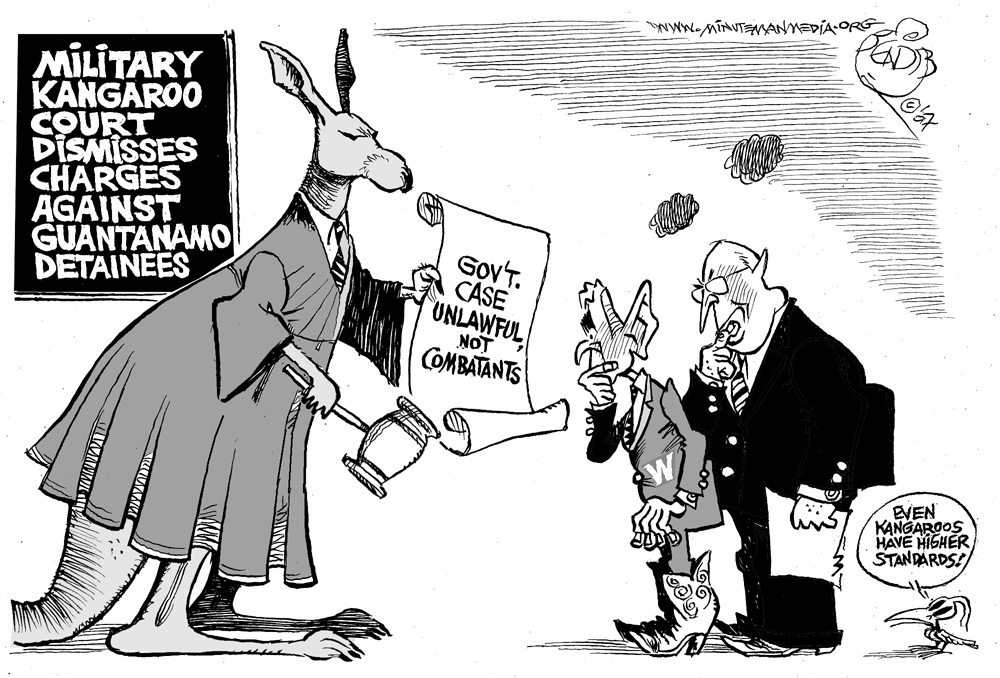 When I asked Ellen Ratner of the Talk Radio News Service on the show this morning why I’ve seen no mainstream/corporate media coverage of the “pre-trial hearing” of Kalid Sheik Mohammed and the other 9-11 accused detainees being held this week at Guantanamo Bay she said that she’s not covering it because it’s a “Kangaroo Court“.

I agree with her – but still think we should be talking about it.

There are about 23 reporters from the US there this week covering the hearings, including Jason Leopold of  Truthout.org.  We were planning on having him on the show this morning, but there is no cell service!  So, I read his tweets, and hope to be able to update you via his email for the rest of the week, and he’ll come on for a lengthier discussion about the experience once he gets back home.

In the meantime, do follow Jason on twitter, and some other reporters there too: Ryan J. Reilly (Huffington Post), John Knefel (AlterNet) and Carol Rosenberg (Miami Herald/McClatchy).   Stay tuned….

It’s been a while since Howie Klein paid us a visit, so it was great to talk with him this morning.  Putting on his Blue America PAC hat, we talked politics – and about the fact that there are two Senate seats opening up with Saxby Chambliss of Georgia and Tom Harkin of Iowa deciding not to seek re-election in 2014.

And we discussed the race in Illiois to fill the congressional seat from the 2nd district, vacated by Jesse Jackson Jr.  The primary is four weeks from today, and we have a great progressive candidate in state senator Toi Hutchinson.

I interviewed her last week (do check it out if you haven’t yet!), and Blue America set up a special fundraising page for her, and sent out this email on her behalf:

We also talked about the crazy things happening in different parts of the world.  Howie Klein, who blogs at DownWithTyranny, is also the most traveled person I know.  He actually has another blog on which he writes about his adventures around the world.

He just happened to spend the holidays in India, arriving in Delhi on the day that the recent gang rape on the bus happened.  He also spent a month in Mali not too long ago. We talked about the fact that rape seems to be endemic in India, though he said that this incident so outraged everyone that the women are finally rising up to take action.  He told us about how slavery is commonplace in some parts of Mali; things we don’t hear about here in the US.

I hope you follow the links and read Howie’s “Around the World” blog.  It’s like no other travel blog I’ve read.

It’s Tuesday, that means GottaLaff hangs with us during the second hour of the show.  Today, she brought us these stories…

Author Stephen King: Require NRA to “help clean up the blood, the brains & the chunks of intestine” at school shooting scenes

Dick Durbin on filibuster deal: “It requires good will [and] good faith.” You can stop laughing now.

John Boehner is a squish. He says he ain’t.