“Trump turned in the worst ― and I mean worst ― debate performance in modern times.” 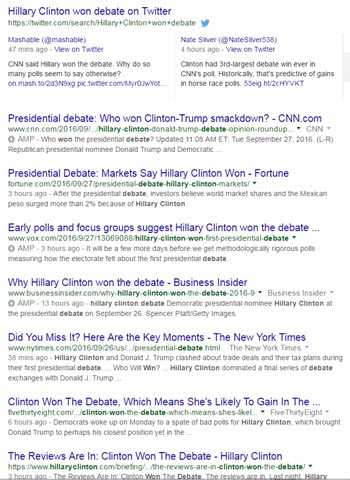 As the airing of the first presidential debate approached, many of us were feeling a little queasy. What if Trump managed to check his lunacy just long enough– 90 minutes– to convince more voters that he was competent enough to hold the most powerful office there is? What if Hillary Clinton blew it, losing even more ground to a sub-human wrecking ball? Thankfully, that didn’t happen. Thankfully, Donald Trump was as repugnantly and recklessly Trumpy as always.

Donald failed miserably, and everything I’ve read, seen, and heard confirmed that.

I searched and searched for the video in which Howard Fineman echoed what he wrote in his Huffington Post piece, but unfortunately, MSNBC didn’t post it. But that’s okay, Fineman made his point loudly and clearly in print:

I’ve been traveling to presidential debates since 1988, and the one I just saw here at Hofstra University was historic.

Republican nominee Donald Trump turned in the worst ― and I mean worst ― debate performance in modern times. It was so bad that in a normal year, it would disqualify him from getting anywhere near the White House.

For what it’s worth, the consensus in the press room was that Trump had been had.

Chris Matthews called it a “shutout” adding that Clinton “cleaned his clock”:

Looks like a whole lot of publications agree. I took a couple of screen grabs of my Google search. One is above and here’s the other: 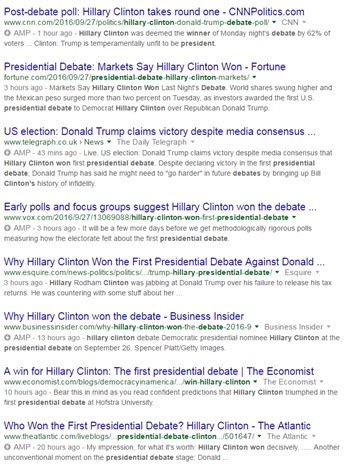 Under no circumstances should Trump get anywhere near the White House.

Despite my misgivings about Hillary Clinton, she will get my vote. I refuse to allow women’s, civil, First Amendment (among others), religious, voting, and gay rights to be jeopardized. I refuse to be irresponsible enough to let a deplorable, small-minded, climate change-denying madman who thinks stop-and-frisk is A-OK to put his vile stamp on this country. I refuse to enable a possible victory by someone who thinks more nukes are a good thing, who wants to ban Muslims, who labels Mexicans as rapists, who stiffs his own employees, who won’t share his tax returns, and who ridicules the disabled.

This thin-skinned idiot who mocked Clinton’s stamina couldn’t hold his own for an hour and a half, so how on earth could he get through even one day in office should he get *shudder* in?

For those who can’t bring themselves to mark that dot next to Clinton’s name on the ballot, I understand your right to vote for whomever you choose, your commendable devotion to your principles, and I can relate all too well to any reservations you may have. I get it. But only one of two people will win in November. This race is way too close to take chances with the future of this country when an ignorant, misogynistic, racist, bigoted lunatic could very conceivably win. Imagine your life if lyin’ Trump were to make a few presidential decisions.

We can’t let that happen. And after witnessing Trump’s unprofessionalism and blatant disrespect for all voters by refusing to so much as prepare properly and understand the basics of what it takes to be commander in chief, I’ll do everything I can to make sure he loses.

If you missed the debate, here it is in full: