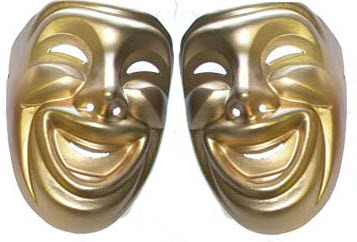 HILLARY is having a hard time connecting with millennial voters. So now she’s saying that last week’s coughing spell was actually due to a “massive bong hit.”

Monday night’s Presidential Debate will have a Super Bowl-sized TV audience. The Super Bowl audience drinks for fun. The debate audience will be drinking out of sheer terror.

DONALD TRUMP’S running mate MIKE PENCE said that his role model for the Vice Presidency is DICK CHENEY. To prove it, PENCE had six heart attacks and shot his friend in the face.

Last week a terrorist placed pressure cooker bombs in a couple of different places around New York City. Thankfully, no one was killed. Can’t we assume that anyone buying a pressure cooker is only looking to do damage? With all the microwaveable food available, no one who lives in N.Y. cooks.

The real O.J. — in prison for another crime — wanted to celebrate the wins by having a drink with his dinner. He was heard asking the guard, “What wine goes with slop?”

ANGELINA JOLIE and BRAD PITT, after 12 years of being together and six kids are splitting. ANGELINA says BRAD abused the children. Not by hitting or yelling at them. He couldn’t remember all their names.

They were together for 10 years and married in 2014 for only two. “That’s the trouble with marriage,” said ANGELINA. “It’s the number one cause in this country of divorce.”

A close friend said, “I can’t understand it. They worked on separate movies, lived in different cities, took separate vacations. They did everything they could to keep the marriage together.”

SHARON and OZZY OSBOURNE have also filed for divorce. . The grounds, “Irreconcilable tattoos.”

When asked to comment on their 33 years of marriage OZZY said, “I was married?”

ANGELINA JOLIE and BRAD PITT, SHARON OSBOURNE and OZZY OSBOURNE, JENNIFER GARNER and BEN AFFLECK all getting divorces. Seem like these days more adults are running away from home than children.

The Surgeon General has ordered research to help stamp out one of Hollywood’s greatest diseases, “Irreconcilable differences.”

Olive Garden’s “Never Ending Pasta Passes” sold out. All 21,000 passes, priced at $100 apiece. The deal is, you can eat all the pasta you want for a period of seven weeks, and if you don’t last the full seven weeks, they’ll dump the remainder of the pasta into your coffin.