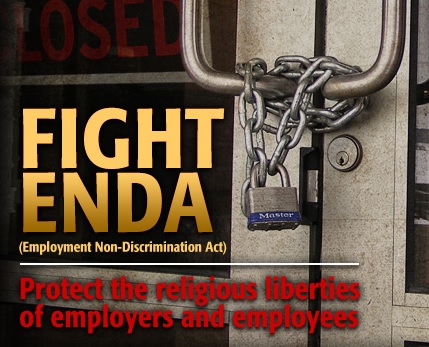 Today the Senate will pass the Employment Non Discrimination Act.  It’s about time that people can no longer be fired because of their sexuality or sexual identity.

The forces fighting to keep workplace discrimination legal seem to be doing so in the name of “religious liberty” – and even more damning is that the religion they’re “protecting” is Christianity.

Whoa! Does anyone else see the massive disconnect and overwhelming hypocrisy here?

As a person of Jewish heritage who long ago used logic to rid herself of any organized religious beliefs, I do believe in the “golden rule”.  I’ll admit I’m the last person you’d want to consult about what is written in the Bible, but I do know that Jesus taught charity, compassion, and tolerance – everything today’s religious right seems to be resolutely against.

The claim of the religious right that their religious liberties would be threatened by allowing others the freedom to live their own lives in whatever way makes them happy while posing no threat to anyone else is not only absurd, but it’s un-Christian!

Yesterday, the Supreme Court heard a case about prayer before public meetings.  From the Talk Radio News Service:

* The Supreme Court, which begins its sessions with an invocation to God, considered Wednesday whether Greece, NY, had crossed a constitutional line in opening its Town Board meetings with mostly Christian prayers
* The court 30 years ago decided that legislatures may open their sessions with a prayer. The question Wednesday was whether different rules might be needed for a council meeting, where citizens often come to ask for favors or official action
* Justice Elena Kagan immediately asked Thomas Hungar, representing the town, whether it would have been proper for the chief justice to have asked all in attendance to stand, bow their heads and listen to a prayer that called upon “the saving sacrifice of Jesus Christ on the cross.”
* Hungar said he d idn’t think so, but that legislative sessions had a “different history” about prayers opening legislative sessions. That was in part the essence of the arguments, which went to the question of what prayers would be acceptable to non-Christians
* Justice Alito gave the example of Christians, Jews, Muslims, Buddhists
[and] Hindus …Wiccans, Baha’i.” – “And atheists,” Roberts chimed in. “Throw in atheists, too,” Scalia insisted, later urging the lawyer to come up with something that “devil worshipers” could accept.

I was inspired by a news report from a month or so ago, about someone who was fed up with the hypocrisy of these prayers:

I, too, am now an ordained minister in the Church of the Flying Spaghetti Monster (or Pastafarian minister, if you prefer)…  Note that I shall NOT be asking for tax-exempt status because I believe it’s my duty to pay my fair share.

On the show today…

Mike Rogers, managing director of Raw Story, joined me to talk about ENDA and the religious hypocrisy embodied by those opposing it.

Absurdity Today‘s Julianna Forlano joined in to talk about the election in NYC and NJ – and what the mainstream/corporate media isn’t telling you!

As the high paid TV shills keep talking about what a blowout victory it was for Chris Christie, they neglect to tell you that Bill de Blasio won by a bigger margin!  Christie won with 60.4 % of the vote in NJ, but de Blasio got a whopping 73.3%  in NYC.

Christie’s win over Barbara Buono came with the help of the Democratic party who gave her ZERO support. They ignored her candidacy, gave her no money or even moral support.  Yet she still managed to garner 38.1% of the vote, even winning the NJ counties of Hudson and Essex.

In fact, in terms of actual number of votes, Barbara Buono racked up 790,245 votes, without even a modicum of support from the Democratic Party – state or national.

And even though Bill de Blasio crushed Joe Lohta 73%-24%, it’s interesting to note that Buono received more votes than did de Blasio who, with 99.7% of the votes counted, got only 752,604 votes.

Although the populations of the state of NJ and New York City are similar (8.865 million and 8.337 million respectively), the people of NJ showed up, whereas NYC residents didn’t.

So to the people who are complaining about NYC electing a “card carrying Commie” as did one former friend on Facebook, maybe you should have voted… though I doubt the outcome would have been any different.

Amy Simon checked in from She’s History to tell us about Shirley Chisholm who was elected the first black female Congressman on Nov. 5, 1959.

And we wrapped things up for the week with a wrap-up of the progress made in the march toward ending marijuana prohibition, with Morgan Fox of the Marijuana Policy Project.

And I’ll be back Monday morning – Veterans Day – with a new live show, talking with Jason Leopold who has just broken a huge story, gaining access to the diaries of Abu Zubaydah.  Read the background here, and the first volume of the diaries here.  And tune in at 10ET Monday morning for Jason’s story!

And don’t worry about watching the Sunday talking head shows (MTP will be kissing Chris Christie’s feet and explaining that there’s a reason “Christ” is part of his name!)… Nicole Belle will join us for our weekly Fools on the Hill segment too.