Why Pastor Pence Is As Politically Alarming as La Palin 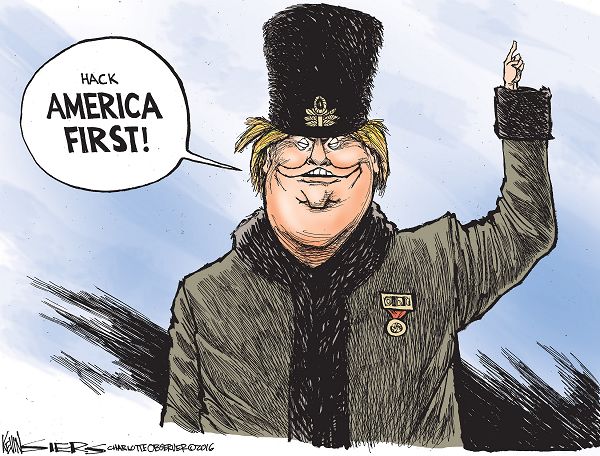 The only dark duo with a shot of historically rivaling the political infamy of ole’ Bomb Bomb McCain/Barracuda Sarah Palin is now the bad cast in this torturous national Reality Show, election 2016. Pence/Trump are now officially horror story actors. 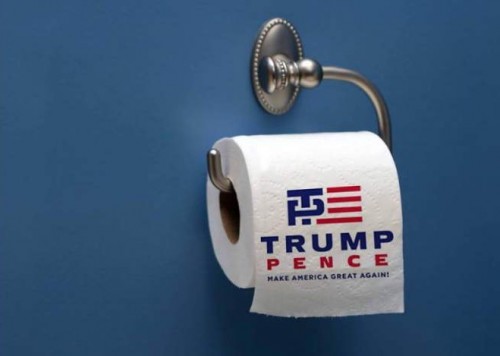 We refuse to admit that Conservative athlete Mike Pence ‘won’ the Veep debate Tuesday night. But man oh creepy creepy man, do not take his GOPper cred and misogyny lightly. It’s only going to amplify in the coming final weeks before polling day, boasting mega vituperative nonsense and an ocean full of outright lies from Team Donald.

The nuances of Pence are more Machiavelli than Trumpesque. While Idiot Donald and His Hair spit out preposterously sexist and xenophobia ridden slurs, Pence has acted out the very crimes against women and minorities Trump could only hope to commit.

Governor Pence and the shrew half-Governor Palin have much in common … but Pence is smarter than Mama Grizzley and her all of her devious handlers combined. Yet Palin was an easy commodity to try to sell to the Fvx Masses and the swath of gun-carrying camouflaged redneck types McCain hoped to pocket. 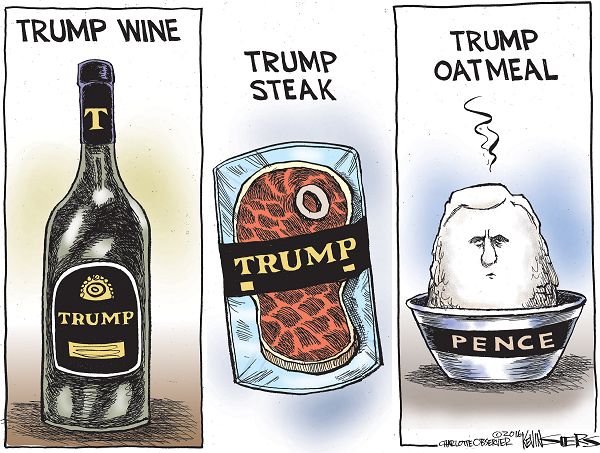 Which failed. Spectacularly. The thinking part of the nation saw through Sarah’s opaque ignorance immediately. Then appropriately reveled in Tina Fey’s brilliant peeling of that semi-literate odiferous Alaskan onion. 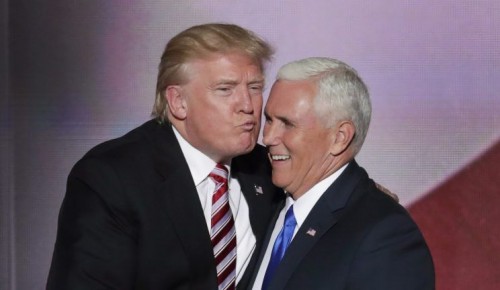 And so those ‘smart’ Donald dignitaries went for the equally misogynistic Governor Mike Pence of Indiana to fill Palin’s Prada pumps.

The same Pence who regularly wet dreams of taking the modern America and women’s limitations and rights back a couple centuries. 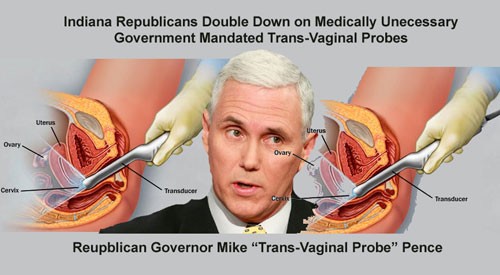 Need we remind ourselves of “trans vaginal probes”? That Special Ops attack on women should be captured for the history books.

While women are still allowed to read.

Yet why aren’t the truly factory made Cons (who will most always vote guns, gays and Bibles) embracing Pence with La Palin level fervor? He has blatantly helped set women back, and is stumbling along with a gutter-mouthed boor ~ are those still not the Fvx Nation aspirational solid gold election eggs?

The Generals always have the awkward transition from Primary mayhem. Insults broad and pointed just flying everywhere — until the Fall In Line autumn playbook of Repugs finally ends the in-party pummeling; and all obvious Conservative self-interest toodles back into hiding.

Pence proved himself far more of a hawk than either Donald or his acolyte Sarah Palin in the aforementioned VP debate. While Donald Dicque is bromancing it to third base with Putin and virtually ignoring Syria, his (only) surrogate has bomb bomb bombing on the gubernatorial brain. 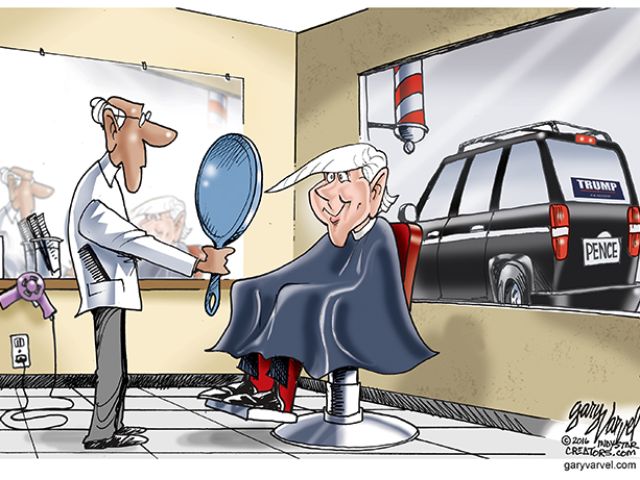 “Small and bullying leader” was Pence’s praise for Mister Putin. Meanwhile, Trump has his high end daughter secretly plotting to renovate The Lincoln Bedroom into The Putin Gold Suite. For Don Don Senior visibly drools at the sordid thought of a warm and fuzzy future with Vlad. Shirts optional. 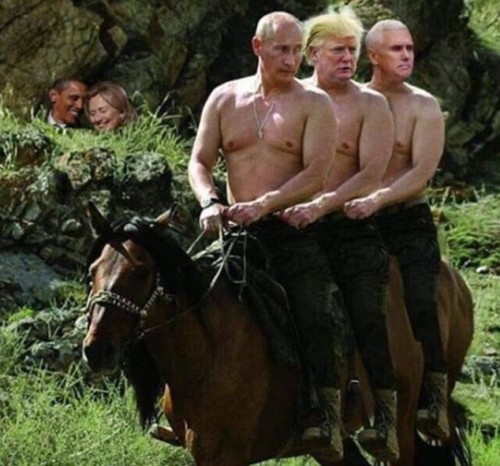 More apologies. That horse is praying for a glue mogul to ride by.

Who knows if La Palin secretly fantasizes about a half-naked Vladimir or not, but at least she put a believable sour face and a Krieg light on Putin Hatin’.

After an unearned victory lap by the Indiana Neanderthal, the pair just gushed about the conflicts and troop deployments the Obama Doves have tried to avoid on principle and at all costs.

Manure spreader Rush Limbaugh had all kinds of tingles, tinkles  and goose bumps making merry last night as he slobbered over The Pence as the hawt guest on his Regressive Radio Babel platform.

The vice presidential nominee  swung by the Limbaugh Bog to score Regressive points and, naturally, to do proper obeisance to the sexist, hawkish mess of a debate ‘win’ Tuesday night. They cozily chatted about The Donald’s vision for Trumping America.

“Governor, I have to commend you,” Limbaugh said. “I don’t know how you did it. I don’t know how you kept your composure last night. … I thought the whole thing was beneath the dignity of the American people, and you handled it magnificently. … How did you do it? You had to just be — I don’t know — burning, frustrated at certain points wanting to just pop out of that, but you didn’t.”

And then Rush Limbo’d lower, giving an all caps prime ass kissing to Pastor Pence, below. Who eagerly lapped up the artifice like his God had already informed him of his prowess personally.
. 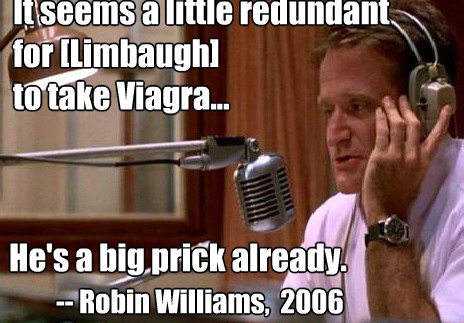 So sad to see a senior citizen licking more than his own aging cigar in public, Rush.

YOU ARE TRULY ONE OF THE MOST MAGNANIMOUS AND GRACIOUS MEN THAT WE HAVE IN AMERICAN POLITICS TODAY, BECAUSE YOU JUST… YOU HAVE THAT KNACK, GOVERNOR, AND I NEED TO APPLAUD YOU FOR IT. I DON’T HAVE THE ABILITY TO CONTAIN MYSELF AFTER AN EVENT LIKE THAT THE WAY YOU DO.

If we don’t work our own asses off to Get Out the Vote this year, we shouldn’t be allowed to bitch when the country tanks and we are all trying madly to get Mexican citizenship.

It is not hard to see Limbaugh as the Trumpet Press Secretary if he manages to part some seas and drown Ann Coulter first. 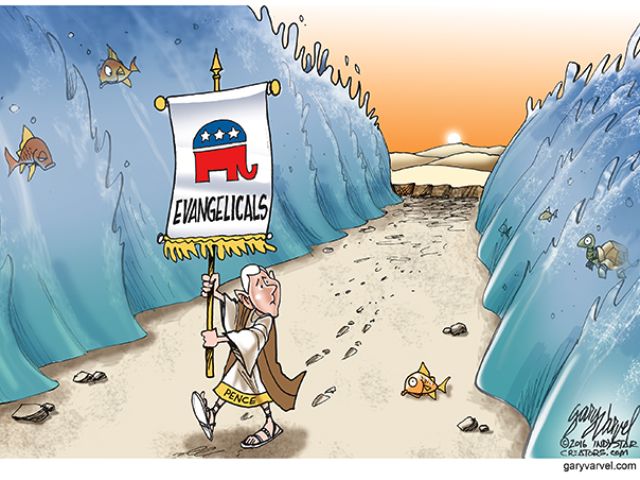