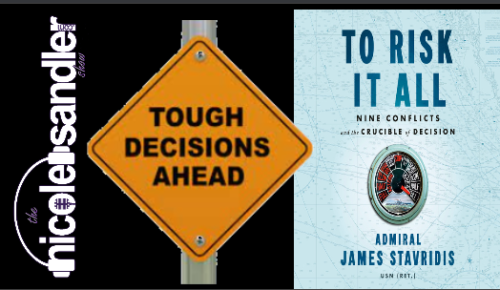 I don’t often get to question military leaders, either current or former. My track record isn’t great.

Consider the last time I spoke with General Wesley Clark. It was June of 2014. I was guest hosting the Randi Rhodes Show, and ISIS was gaining ground in Iraq, and it looked like we were going back in. So I asked the logical questions, and his responses shocked me. I let him know. Needless to say, it didn’t end well!

Well, today, I try again. Not with General Clark, but with Admiral James Stavidris.

I’ve seen him over the years on NBC and MSNBC, and he has a new book out, To Risk It All: Nine Conflicts and the Crucible of Decision.    It’s about making tough decisions while under fire, in the heat of the moment.

I asked him about that with regards to the commander in charge of the school police in Uvalde, Texas, and the withdrawal of US troops from Afghanistan.

As he served for a while as NATO Supreme Commander, I asked about NATO, along with Ukraine and Russia. And I asked him about an issue that’s been hanging out there since the start of the war in Iraq, about possible lack of transparency when former military appears on TV as military experts without disclosing who they’re working for, usually in the military industrial complex…

As usual, we’ll begin with a look at all that’s happened since we last spoke on Friday…