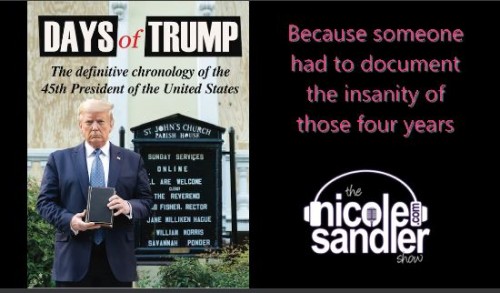 It’s a busy day in DC. The senate continues debating the voting rights package, as a vote is planned for this evening at 6:30ET. All indications are that the vote will fail, but the goal is to get everyone one the record as to where they stand, Manchin and Sinema included. There is a question about what it would take to change the filibuster back to a talking filibuster… but I guess we’ll see how it plays out tonight.

My guest today is actually an old friend. I met Tim Devine when I was Music Director and on air at  fm 101.9 KSCA in Los Angeles back in the mid-90s. Tim was an A&R guy for Capitol Records who signed Bonnie Raitt to Capitol; the result was the groundbreaking album “Nick of Time.”

Tim and I became friends, though I haven’t seen or spoken to him in probably 25 years. A few weeks ago, I saw a post on social media from him promoting his new book, Days of Trump: The definitive chronology of the 45th President of the United States. My first thought was “WHY?” Then I reached out and invited him on the show. The fact is, someone had to document the insanity of those four years. We must remember and never let it happen again!