Power to the People: Save Michigan 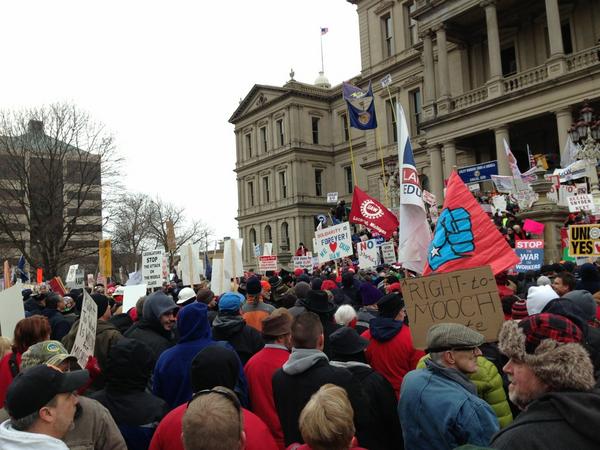 Thousands of people took to the Michigan Capital in Lansing today as the State Senate took up its lame-duck session rush bill to pass the ALEC pushed “Right to Work” legislation, undoing decades of hard fought victories on behalf of working people.

Having worked in both a “right to work” state and under union membership in a union-friendly state, I’ll take the latter any day of the week.  My career has always been in radio.  In California, as an AFTRA member, I had protections.  I had negotiated vacation, sick leave, and a minimum salary range.  My employers could NOT take advantage of me.  Plus, I’m vested and now look forward to a pension when I’m old.  Thank you AFTRA.

Unfortunately, I now live in Florida a right to work for less state.  AFTRA has no jurisdiction here, and as a radio performer, I’ve had no rights.  In fact, in one job, I had double the responsibility of my male predecessor but made half the salary.  And I had no recourse other than to not take the job.

I’d gladly pay AFTRA dues to have them working on my behalf.

Today on the show, I spoke with FireDogLake‘s news editor David Dayen who last week informed us he’s moving on.  As one of my first go-to news sources each morning, I’ll miss his blog.  But I’ll let you know where he turns up next.

And if it’s Tuesday, we shoot the shit with GottaLaff of The Political Carnival.  Today, she brought us these stories and more:

VIDEO: Charlie Crist tries to convince us he’s a real Democrat. Compare to tweets, video of the “old” Crist.

What marriage equality looks like: “You know, we woke up and we realized, we don’t have to rush.”

So much for Bobby Jindal’s “transparency”: His top aides use personal emails to strategize on Medicaid cuts

GOP: The party of no ideazzzzzzz

Speaking of Government Revenue Shortfalls, Tax Marijuana Instead of Prosecuting It

Why aren’t we talking about a Wall St. transaction tax and much, much more? Hmm?