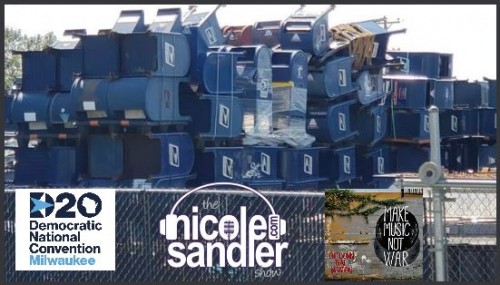 Download here or click below to play
It feels like we’re in a pressure cooker ready to blow its top! The first virtual national political convention ever gets underway tonight and the Democrats are playing with fire. The Philadelphia Inquirer‘s Will Bunch joins me at the top of the show to talk about the DNC and the even bigger story today, the sabotage of the USPS by the president as another way to steal the November election.
We also have a Monday Music segment today. South Florida-based Y&T Records is out today with “Put Down that Weapon: Make Music Not War.”  It’s a new album of protest song covers by Florida-connected artists to benefit Guitars Over Guns. We’ll speak with Y&T founder Rich Ulloa about this important project and listen to a song or two.
It was nice to see the local press, including The Miami Herald, South Florida Sun-Sentinel and Miami New Times all give the project some good press.
The record release party is happening Thursday night, Aug. 20, with a virtual concert via Facebook and YouTube at 8 pm. Most of the artists on the album will be seen in pre-recorded performances, each opening with remarks about the influence of the song they’ll play.
Today’s funny was the one I was waiting for from Randy Rainbow (I did ask for a Kamala “Camelot” parody on Thursday…)
By Nicole Sandler|August 17th, 2020|Tags: DNC, Guitars over Guns, Monday Music, Put the Weapon Down, Rich Ulloa, USPS, will bunch|0 Comments