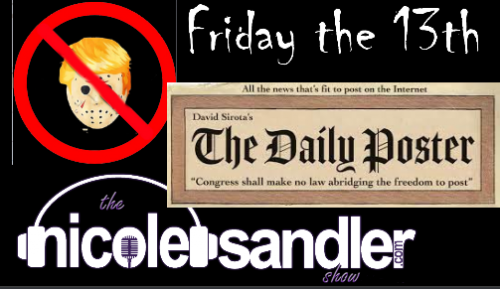 Today is the day that we were told Donald Trump would be reinstated as president. We heard it from the pillow guy, MAGA world and Trump’s sycophantic followers. It also happens to be Friday the 13th, so if Trump ever were to enter the Oval Office again, Friday the 13th would be the appropriate day for it to happen.

But it won’t. That doesn’t stop them from proclaiming it as fact.

We live in strange times when otherwise intelligent people spew lies and proclaim them as facts. Even some who call themselves “news” organizations.

o it’s a good thing when a new, independent news organization takes off.

Today, we’ll celebrate one of those. David Sirota has been around a long time. We know him as a journalist, a radio host, and even as Bernie Sanders’ speech writer. Now he’s also the founder and Editor in Chief of The Daily Poster, which everyone who listens to this show should be reading. We’ll talk about the stories they’re covering, which is exactly what we discuss here on the show every day.

At the top of the show, someone forgot to tell the pillow guy that today would not be reinstatement day. h/t J-L Cauvin

And for those who like to watch, radio on the video machine