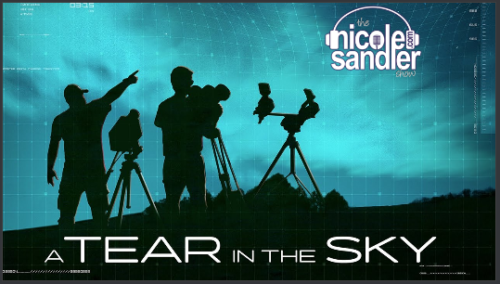 This is not a good time to be alive. I’m not saying the alternative is better, just that things around here are pretty messed up… from the effects of climate change which are getting worse each day, to the war and all the killing (Putin is only the tip of that spear), to the rising fascism not only here in the US but around the planet. And the fate of our wonderful democracy? Good thing I’m not a betting woman, as I don’t even have any money to bet that we go down in flames.

Like most Americans, I’ve been trying to figure out where I could go if things revert to the former guy’s minions in the next election. And sadly, there seems to be nowhere to run. Or maybe there is?

The US Government is finally gradually releasing information about sightings of Unidentified Aerial Phenomena (better known to the rest of us as UFOs!). Today on the show, we look to the skies.

There’s a new film streaming on Prime, YouTube and other outlets called A Tear in the Sky. Producer/Director/Writer Caroline Cory and UFO Investigator Dave Altman joined me to talk about the film which covered a five-day expedition to get read data on the UAPs.  They started from those first videos that were published by the NY Times in 2017, working with some of the military pilots who witnessed the footage as it was shot.

The idea of life out there has been long ridiculed by most… I’ll pull out a short interview I did with the actress Shirley MacLaine back in 2007 after she was invoked in a presidential debate by the late Tim Russert, who asked then-candidate Dennis Kucinich about a UFO spotting he had while with her out in the desert. Because we can…