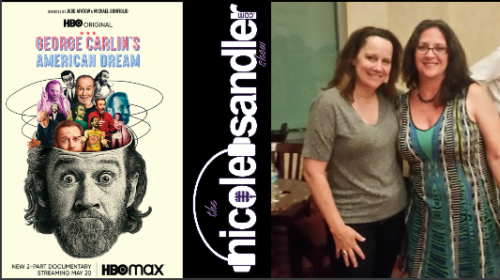 When something huge happens in the world, my mind goes to what George Carlin would think. He was not only THE comedian with his pulse on everything, but he seemed to be able to predict the future. ‘Prescient’ is a word I often use to describe him, as I did last week when a Carlin bit on abortion rights went viral after the leak of the Supreme Court draft opinion that appears will overturn Roe v Wade…

So, in a sense, we do have him weighing in on current events. But not really. The world lost George Carlin in 2008. Although there are many talented comedians riffing on our lives and tribulations, there’s still a giant hole where George Carlin should be.

A few years back, I was fortunate to meet Kelly Carlin. She wrote a memoir,  A Carlin Home Companion, about growing up as the only child of the comic legend of our times. She then wrote and performed a one-woman show based on the book, which I was also fortunate to see. And she came on my show to talk about it, and has returned numerous times since then. Not to talk about her amazing father, but to talk about the important work she’s doing herself.

Well today she’s back to talk about George! A new 2-part documentary premieres on HBO and HBO Max this Friday and Saturday. It’s directed by Judd Apatow, and Kelly is one of the executive producers. So I get to pepper her with questions about her dad without feeling guilty about it…

We’ll begin the show with a feeling of relief and comfort, as the first big primary day of the 2022 midterms was mostly encouraging! Big wins for progressives, as John Fetterman handily won the Democratic nomination for senate from PA, and Summer Lee appears to be on track to win her race to run for the House seat form District 12, defeating a corporate, deep pocketed attorney Steve Irwin and the almost 4 million dollars spent on his behalf against her by PACs aligned with AIPAC.

There’s even better news out of Oregon where the progressive running to unseat the man often called the “Joe Manchin of the House” — Kurt Schraeder- did it! Jamie Mcleod-Skinner is enjoying an almost 2-1 lead over the soon to be former DINO congressman from OR-5. So, George (and Kelly) Carlin and some good electoral news for progressives. That’s a Wednesday I can believe in!