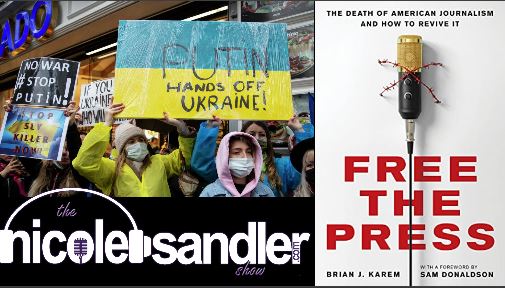 It’s now Day 6 of the Russian invasion of Ukraine, and the Russian propaganda is being spread thickly. I think it’s the same people who want to do their own vaccine research, as if anything they find out will be more credible than the world’s scientific community. In this case, Vladimir Putin has invaded and is waging war on an innocent neighboring nation, simply because Vlad wants his Soviet Union back. But these idiots are echoing his propaganda, claiming that the nation led by a JEWISH man is filled with Nazis who are exterminating ethnic Russians living in Ukraine. Why weren’t they screaming about this a month or more ago? Because it’s bullshit!
The easily led are so easily led.

Our guest today is journalist Brian Karem who just released a new book, Free the Press: The Death of American Journalism and How to Revive It. We have much to talk about.

I had hoped to connect again with Tatiana who owns the Friends Forever Hostel in Kyiv, Ukraine. We’d been texting back and forth all day, and she was set to come on with me at the top of the show… but about 90 minutes before showtime, she sent me a message that simply read, “We have an air alarm we run to the basement”. That was now four hours ago, and I haven’t heard back. But I’ll keep the messaging window open and hope that she surfaces again soon.

In the meantime, I asked what they needed, and here’s what she sent me. If you want to help supply the troops, she said they need helmets, uniforms and ammunition.  Visit this site, then refer to the image below if you want to help out with a donation.

She said she’ll let us know more of what they need very soon. And again, hopefully we’ll talk again tomorrow.