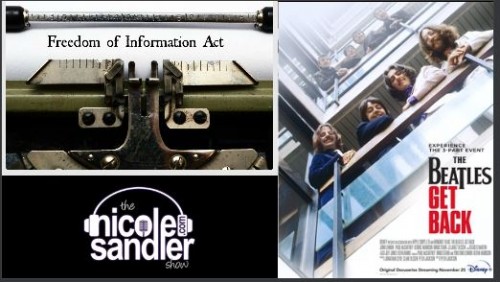 We’ve got a lot to jam into our last hour of the week today. We’ll start with Jason Leopold, who has another two FOIA victories that earn him bragging rights.

One of them resulted in 10 redacted passages from the Mueller report being made public. The other has to do with multiple allegations of CIA personnel and sex crimes involving children. The government nicknamed Jason “the FOIA Terrorist.” Nope. He’s the FOIA Master damn it.

We’ll move to a much more pleasant topic for the second half of the show. Variety‘s Chris Willman will join us to talk music– specifically Peter Jackson’s epic 8-hour Get Back documentary about The Beatles, that’s streaming on Disney Plus. Chris wrote about the event in one of the better missives I’ve read titled “Why the Beatles’ ‘Get Back’ May Stand as the Best Rock Doc Ever“.

Embedded at the end of the piece, is this interview Chris did with Peter Jackson.

Since Jason Leopold is, like me, a huge music-phile, he’s going to stick around for the Chris Willman interview.

For those who like to watch, today’s show on video…