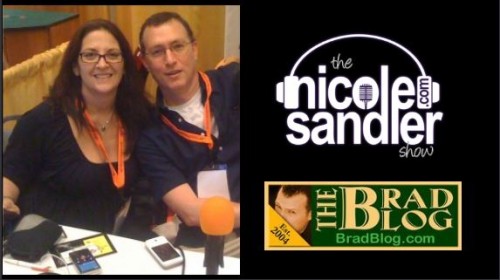 I have not been closely following Donald Trump’s myriad of lawsuits filed by his crack legal team of Rudy Giuliani, Jenna Ellis and Sydney Powell because it’s all so ludicrous. There is simply too much actual important information I need to stay on top of. So, the “elite strike force” hadn’t commanded too much of my attention– well, except for the parts blaming Hugo Chavez for fixing the vote and the black crud leaking from inside Rudy’s head– until I had a conversation with Brad Friedman.

Brad has been doing intrepid investigative journalism on US election issues — from touchscreen voting machines to hanging chads to voter suppression and beyond — for almost two decades now at the Brad Blog. About 10 years ago, Brad reported extensively on the problems with most electronic voting machines, including Dominion. And some of those stories appear to have provided the backdrop to some of the ridiculous allegations of “voter fraud” and “fixed” races Trump’s been claiming.

It’s all quite surreal. So, Brad Friedman joins us today to try to explain what this is all about. The main point he makes is that they relied on his reporting to form the basis of their story, but they got every fact wrong.